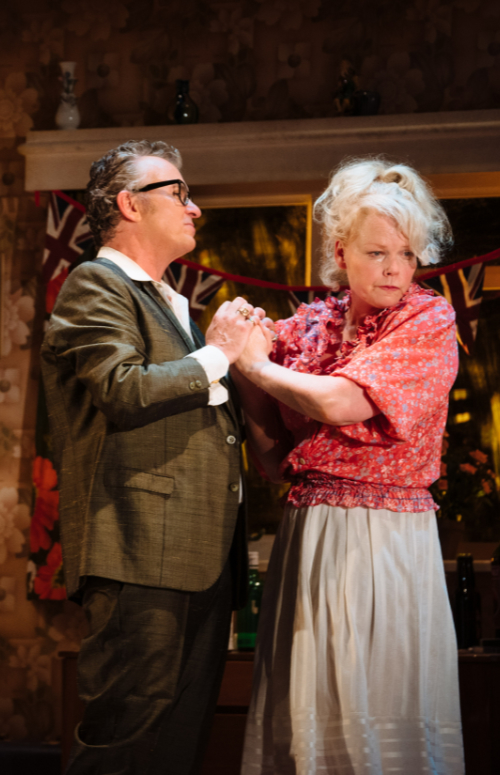 Though originally written in 1956, this adaptation of John Osborne’s The Entertainer is set against the backdrop of the Falklands War and Thatcher’s Britain.  Yet it remains a story about days gone by, where music hall entertainment provides comfort to ordinary people who are tired and poor.  Steve Morris writes about the play: “Many of us can remember what things were like when the country seemed grey and used up.”   Perhaps we are there again now, in turmoil and divided.

Most interesting of the characters is the protagonist and eponymous entertainer, Archie Rice, played here by Shane Richie (best known as Alfie Moon in EastEnders). Richie’s Rice is intentionally brash and, as even he admits, heartless.  Or is he?  He would normally be the antagonist - in fact, in this play he could arguably have been either - but as cracks appear in his armour and I begin to glimpse the man, I warm to him a little.

At first I was unconvinced by Osborne’s vision of the Entertainer, who is in some sense a caricature of the entertainment industry.  But as we are invited to observe his private life, complexities in family relationships begin to unravel; an unfulfilled marriage, rose-tinted recollections of previous relationships and the fragility of the human psyche combine as the play develops.

Direction, production and acting are of a high standard, as ever at the Theatre Royal.  Characterisation is interesting too.  It’s expressed through a mixture of poignant clichés and prejudice, with fairly drab, impoverished people contrasted with real warmth within the family.  Amid the chaos of alcohol-fuelled, late night exchanges, expect anger and heightened emotion as undercurrents surface.

Phoebe Rice, played by Sara Crow (who also appeared in EastEnders), is a very interesting character - and her husband’s assessment of her exposes his shallow essence.  I expected tragedy, but instead there is the possibility at the end of a better life; no guarantees, just a chink of light in a very dark, midnight sky.

Grandad, Billy Rice, is another excellent character who resents being mollycoddled; he’s very alert and he loves his own.  He’s tender, a provider to the end, and he injects a lot of humour and wit into the play. It’s a good opportunity for actor Pip Donaghy (whose credits range from the canon of English Literature to Casualty and Midsomer Murders) to demonstrate his range.  Credit also goes to Diana Vickers as Archie’s daughter Jean, who represents idealism, hope and morality, and to Christopher Bonwell as her brother Frank Rice, who becomes Jean’s conscience.

I did find the first third of the play dragged, and the comedy of the entertainer is unnecessarily crude given the 12 rating (although it is certainly consistent with his character). The drama emerges slowly, but I do have a sense of Osborne gauging and manipulating audience reactions rather than simply telling a story - an approach which is clever, if not comfortable.

The Entertainer is dark and rather than uplifting, but I am glad I saw it. I laughed, and the characters stayed with me after the end of the production… always the sign of a good piece of theatre.

This review of a show in Brighton was published on Friday 25 October.