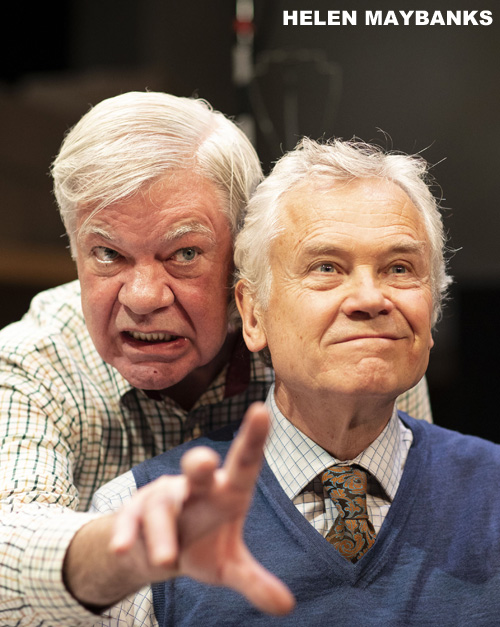 From the outset the dialogue sizzles with witty exchanges, and Bennett teases the audience’s perception as he moves between his play and the play within the play. The acting is good throughout. Matthew Kelly plays the actor Fitz (who in turn plays W H Auden) with great sensitivity; but David Yelland as Henry (acting as Benjamin Britten) competes for attention, and may in the end be more sinister. David Yelland is happiest in the theatre, but has starred in various TV crime dramas including Spooks and, of course, EastEnders. Many of the cameo parts surrounding the leading pair added humour, but the slow exit at the end detracted from the drama – even if intentional.

I was entertained throughout the play, and intrigued by the structure requiring the audience to “suspend disbelief” twice, but the script is not for the faint-hearted: expect smut, not innuendo. It was very popular with the audience, but I felt that Bennett’s representation of homosexuality was disturbing and to some extent distasteful. Bennett was himself bisexual, and perhaps felt this gave him authority to divulge some graphic details about the sexual encounters of the artists – but for me, the humour concealed a rather sordid set of circumstances, and the poetry was sadly lacking.

I left asking myself if the play was about art, or about sex with art as the context. Bennett endeavoured to get inside the characters of Auden and Britten; I’m not sure I like what he found, and I don’t know how much he invented. Relationships are often complex and ambiguous – which seems to be the case here – but with a little more subtlety and sophistication, these multiple facets could be explored in equal measure.

I do recommend this play – you will enjoy it – but expect a few surprises, and take your date, not your mother.

This review of a show in Brighton was published on Thursday 13 September.