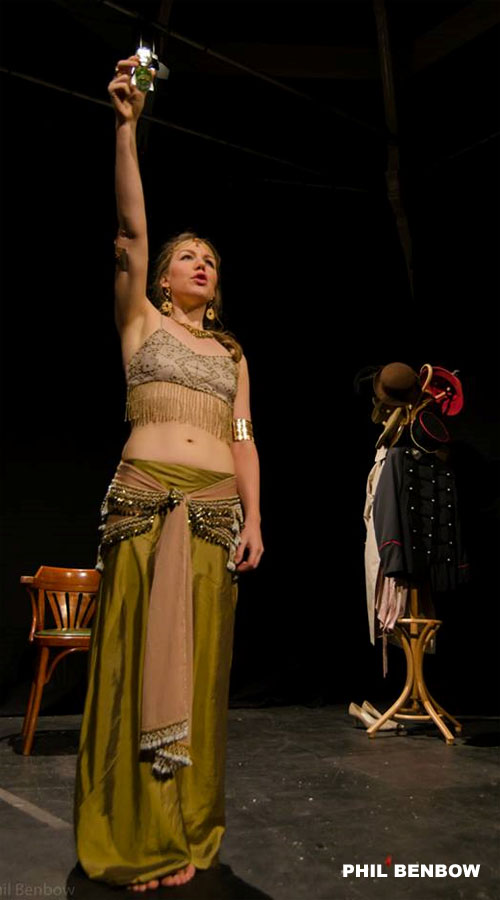 If you know the name Mata Hari, you probably know that she was executed by firing squad, dying in infamy as a notorious honey-trap spy.  At the height of the First World War, the exotic dancer – real name Margaretha Zelle – allegedly sent 50,000 Allied troops to their deaths by seducing military officers and selling information to Germany.  But Zelle’s tale goes back further than that – to her childhood in the Netherlands, her coming-of-age in India and her extraordinary pre-War career.  And Seven Veils opens her life story with one obvious but overlooked fact: that performer Zelle and persona Mata Hari were entirely separate people.

Given the limited confines of a Fringe venue, Faro Productions do a magnificent job evoking the mystique and mystery of Mata Hari’s world.  There’s a nice attention to detail – you’ll even smell incense as you make your way in – and actor Laura Sharp can absolutely pull off such a glamorous role.  As Zelle, she’s excitable and coquettish, but once she dons Mata Hari’s veils she grows inscrutable and aloof.

Even though we know the play will end with a death, Seven Veils is filled with humour throughout.  There’s one inspired moment when Zelle becomes embarrassed by her own diary, and there are some magical set-pieces evoking a happy childhood and the thrill of promised love.  But there’s a darker tale too, told in fragments, of an abusive husband and a public braying for blood.  If Mata Hari was a traitor, then the script presents a credible vision of how she became that way.

The performance, however, isn’t confined to the stage.  From the very first moment, the fourth wall is firmly down: we’re Mata Hari’s final audience, and she’s eager to lap up our adulation and applause.  The set-up works particularly well when Sharp plays with her crowd, as in the scene where a capricious nine-year-old Zelle hands out hats, favouring some of the audience while casually scorning others.  But other moments of interactivity feel like they’re trying too hard, dragging down the pace to the detriment of the general mood.

Overall, I think Seven Veils needs a touch more focus – just slightly fewer antics, and a clearer progression through a smaller set of ideas.  At the start, we’re told that Sharp isn’t Mata Hari (who’s dead, after all), but a representation of Mata Hari’s enduring legend.  Yet that brilliant thought soon gets lost amidst a helter-skelter retelling of the dancer’s life.  The result is fun, engaging, and absolutely worth seeing… but with a little light re-working, it has potential to be even more.

This review of a show at the Brighton Fringe 2015 was published on Sunday 3 May.