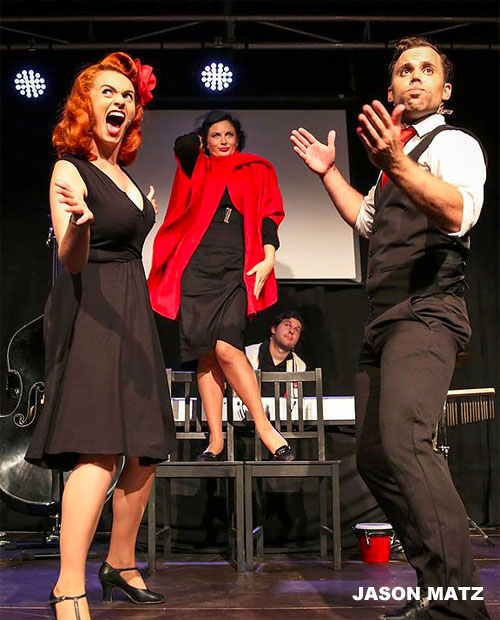 The year is 2042.  A quarter of a century ago, in 2016, Hollywood suffered a virtual apocalypse; the film industry as we know it suddenly collapsed, weighed down by unsustainable budgets and a spiralling chase for thrills.  But one man remembers the golden age, hankering for a return to the brainless movies and over-priced popcorn of his youth.  And when a mysterious woman (and inevitable love interest) offers him the rights to a long-forgotten character, the scene is set for this intelligent, thoroughly entertaining musical.

A Fringe show, of course, will never have the flashy appeal of a West End spectacular, but Point And Shoot is still a perfectly-formed example of what a well-constructed musical should be.  Each of the major characters has their moment in the spotlight; the big solo numbers are either exquisitely touching or thrillingly villainous, according to the demands of the plot.  The lyrics are clever, the tunes are catchy, and the storyline’s bold and clear.  There’s even an actual moral to round off it all.

It’s a musically ambitious production: according to the programme, the four-member cast plays a total of 16 instruments live on stage.  Considering that they have to be strong actors and singers as well, that’s a demand which would stretch the most prodigious of talents, and I have to say that at times it showed.  But I have no such reservations about the quartet’s singing voices, which proved equally comfortable delivering delightful close-harmonies and belting out rousing anthems.

The back-story’s a lot of fun – there’s a knowing, self-referential absurdity to its vision of utopia, where the world’s ills have all been cured by arthouse cinema alone.  An increasingly-convoluted series of plot twists keeps the storyline zipping along, and delivers a real emotional depth at times.  (Look out for the number which contrives to be poignant, despite the character singing it having a colander on her head.)

But all the way through Point And Shoot, there was a doubt nagging at my brain: something slightly incongruous at the heart of it all.  The production’s styling roots it firmly in the middle of the twentieth century – with noir undertones, echoes of jazz, and elegant black-and-white costumes offset by flashes of red.  So if that’s the kind of show Holden Street Productions wanted to make, why did they set their plot three decades in the future?  Throw in some video clips from a fake 1960’s sit-com – which are, I admit, an extremely well-observed pastiche – and you end up with a scenario that made intellectual sense, yet subconsciously left me rather confused.

Never mind though.  Any uncertainty about the timeline is more than offset by a crisp and practised performance, which sees the four actors portraying dozens of characters while keeping each one clearly-defined.  Point And Shoot might not be life-changing, but it’s consistently entertaining – not just a sketch show or a play with songs, but a genuine thoroughbred musical.

This review of a show at the Brighton Fringe 2015 was published on Wednesday 13 May.