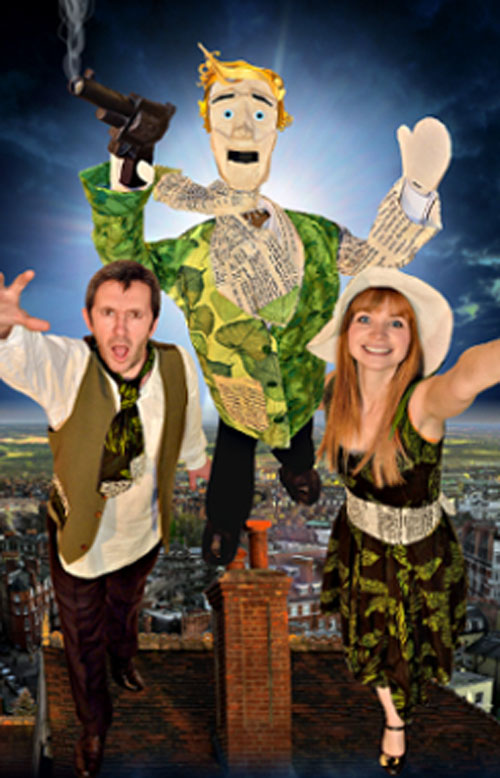 There’s a useful message and moral behind this piece of theatre: that we should remember to get the most out of being alive, and make every day count.  Based on a novel by GK Chesterton, the play is about the arrival of Mr Smith – aka “Man alive” – and the stir his colourful history creates amongst the residents of Beacon House. And just how colourful a past Mr Smith actually had, unfolds as the story is told.

Played seemingly effortlessly by two actors (Antonia Christophers and Noel Byrne), the action moves seamlessly between Box Tale Soup’s trademark puppets and live portrayals by the cast. The duo’s use of accents, poetry and musicality transport us to another time and place, with beautiful songs – full of wordplay and delicious melodies – punctuating the action.

The charming puppets are brought skilfully to life by both Christophers and Byrne, interchanging genders and accents in a performance that’s joyful to watch. I loved the simplicity of the set: two trunks provide all the necessary props, as well as cleverly doubling up as musical instruments and rhythm makers.

So far, so good.  But the actual content of the story is something of a let-down.  It feels too wordy; the re-telling is rather rushed, with just that bit too much packed into the hour. There were some lovely lines that I wanted to savour (“When you're really shipwrecked, you manage to find everything you really need...”), but I didn't have the chance before I was whisked off somewhere else entirely.

And when so much effort has gone into creating a beautiful world for the audience, it’s disappointing that the ending is so fast. I almost missed it; the “happy ever after” for everyone feels too sudden and extreme by far. I’m sure the adaptation would read easily as a short story, but it translates less successfully onto the stage.

Still, the story they’ve chosen is a worthy one – delivering an important reminder that life is for living. And there’s no denying the skill displayed by both the performers. So if you are a fan of puppetry used well, this is a show to take in this fringe.

This review of a show at the Brighton Fringe 2015 was published on Wednesday 6 May.