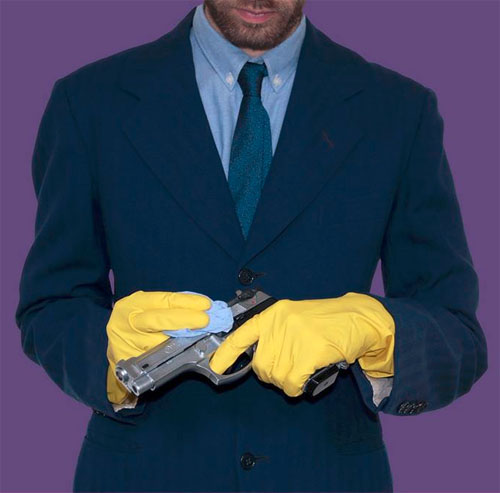 Frank Sent Me is a gangster story with a twist; well, two twists, in fact.  The first is that the gangster happens to be gay - though to the script's credit, that's actually a fairly minor detail of the plot.  The second twist is the nature of the job he's about to embark on.  And that's a brutally chilling surprise, which I'm certainly not going to spoil.

But, although Frank Sent Me goes to some extremely dark places, it's a very funny play too.  The comic timing is excellent; all three actors know exactly how to use a judicious pause to perfectly sell a line.  Perhaps Matthew Gibbs' prissy, house-proud portrayal of the gangster's partner is a little too broad a stereotype, but there's no denying his effete expressiveness furnishes many of the funniest asides.

After a while the humour starts to run dry, but the pace is lifted by the arrival of Blake - the fresh-faced teenager who the eponymous Frank has sent to finish the job.  The young man just isn't up to this particular task, and it's here that the storyline turns almost surreal.  The bleakness of the scenario is disturbingly easy to believe, but Izaak Cainer as Blake helps lighten the mood, turning on his cheekily angelic smile at the most inappropriate of moments.

So it's funny throughout, but it's a touching play too; at times, the jet-black humour is nothing short of electrifying.  Both the gangster and his partner know a terrible truth, and they're both trying to hide it, but like many long-term couples they simply know each other too well.  The devastatingly poignant stiff-upper-lip finale wouldn't be out of place in a 1940's movie, yet the same-sex context brings it right up to date.

In the end, Frank Sent Me has a strange dignity, embodied best of all by Declan Cooke's tough-but-tender portrayal of the older man.  It's a grotesque comedy of manners, yet it's set in a world we might imagine has no social scruples at all.  It's constantly entertaining, but we all know we're laughing to distract ourselves from the horror at its core.  It's a masterful script by Julian Poidevin and - ultimately - it's a play I'd feel honoured to send you to.

This review of a show at the Brighton Fringe 2015 was published on Saturday 2 May.