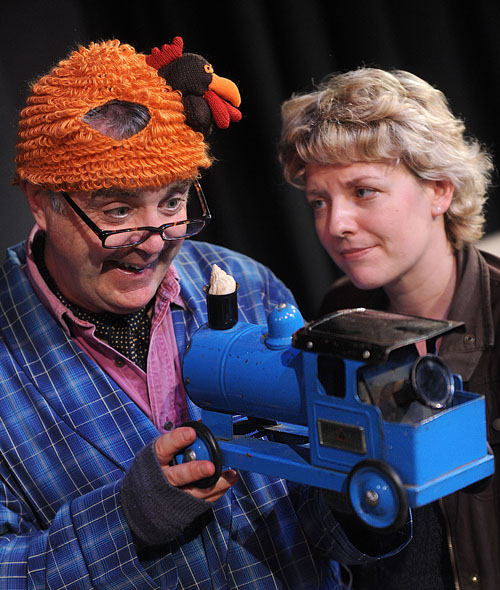 A greying man in a dressing-gown ambles onto the stage.  He’s physically robust, but somehow fragile; not unhappy, yet not quite there.  You’ll understand immediately that Ivor has dementia, and the world inside his brain is a psychedelic mixture of the present and his past.  But today, daughter Lily is there to pack a suitcase – ready, we assume, for the inevitable moment when Ivor moves into a “home”.

All Change is essentially a single conversation: a conversation you sense Ivor and Lily have had countless times before.  As fragmentary memories spring into Ivor’s mind, he runs through events from the distant past as though they were happening today.  At times he seems thoroughly rational; at times he acts like a child.  It’s a picture that’s familiar to many – and sadly, I know from personal experience that it all rings very true.

But I also know that the situation isn’t entirely without humour.  And despite some sad subject matter, All Change manages to keep the tone light: there’s a genuine wit to the old man’s occasional childishness, a delight in breaking society’s rules.  The family’s history is revealed gently, through a combination of oblique remarks and brief flashbacks, all adding up to a rounded picture of lifelong joy tinged by occasional regret.

Up to this point, the play’s course is perhaps a predictable one.  But All Change has a twist: the tragedy at the heart of the narrative isn’t quite what you first believe.  They could perhaps hold on to that secret for a few moments longer – let the dreadful suspicion grow a little more before it’s finally confirmed – but nonetheless, it raises Toby H Marriott’s script above the level of simple observation, and into a place where it truly has something important to say.

Playing Ivor, Tim Marriott’s performance is impeccably judged – never too obvious, never too shrill – building a character who’s almost implausibly kindly, yet still believable enough to make you care.  Deborah Clair is unselfish as daughter Lily, rightly letting Ivor hold centre stage, but she has moments of heartbreaking honesty too.  Look out for the hurt when her father turns against her, or the frustration with his confusion which she can only just suppress.

Surprisingly though, for a play that’s generally so deft, occasional details are outright clumsy.  Sound effects are often intrusive, and transitions into and out of the flashback scenes – which involve lighting, music and a costume change – are far too heavy-handed.  Amidst a generally excellent script, I’d suggest taking another look at the philosophical soliloquy which Lily delivers directly to the audience; it’s poignant, yes, but incongruous in a story which generally epitomises the principle of “show, don’t tell”.

If director Gavin Robertson can conjure up a slightly lighter touch – find a smoother flow through the piece, free of distracting pauses – then there’s five-star potential in All Change.  Until then, it stands as a fine performance of a brutally insightful script, whose charm belies the life-changing messages neatly nestled within.  Find time to see the play, then find time for those you care about.  Because for all of us, it warns, the clock is running down.

This review of a show at the Brighton Fringe 2015 was published on Thursday 14 May.