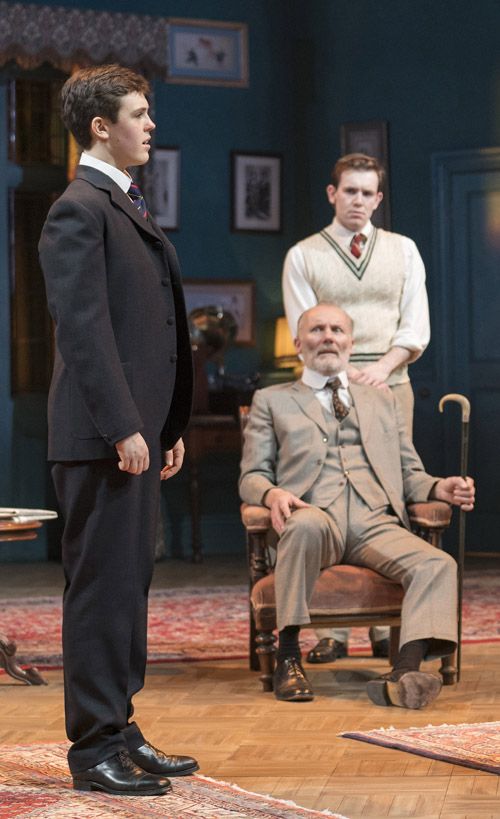 It’s a quintessentially English play, sparkling with wit, irony and sarcasm – from a playwright who some say tends to write farce. Themes of morality, justice, reputation and family loyalty permeate the play, but it is the humour which propelled me at speed through to the end. Although it is a period piece, set in 1908 and first performed in 1946, it succeeds in transcending time because of the family dynamics which both entertain and surprise.

Ronny is the youngest of three children, all very different and each bringing something unique. Interestingly, it’s good-looking Ronny – the Winslow Boy at the centre of the storm – whose character is least well-developed. Oscar Morgan has just begun what may turn into a glittering career, with theatre credits for the National Youth Music Theatre as well as TV, and he could have been given more to do.

Ronny’s father, Arthur Winslow, had some of the best lines, performed with alacrity by Aden Gillett; his story is particularly poignant. But it takes time to get to know his daughter, Catherine (Dorothea Myer Bennett), in whom he may have found his match. She is strong, complex, and humane – and both are self-deprecating in the face of sacrifices. The two actors seem to thrive in theatre, with the intimacy and immediacy it affords, after roles for both in Holby City.

Soo Drouet and Timothy Watson (both familiar from EastEnders) vie for the prize for the cameo part. One is homely and blissfully lacking in self-awareness, the other is still, like a statue or a lion watching their prey.

The cost to the Winslow family becomes clear as the play progresses. It’s outside the scope of this script, but the real George Archer-Shee died in action aged 19, during the first Battle of Ypres. Perhaps through the case and Rattigan’s play, George snatched a morsel of immortality.

This review of a show in Brighton was published on Friday 27 April.