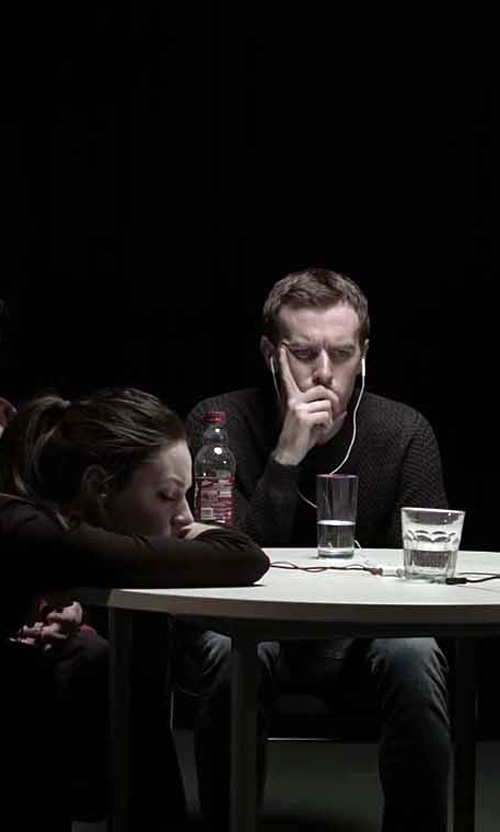 A fascinating and at times mesmerising project, Seven offers an innovative take on the well-worn theme of the recent conflict in Afghanistan.  An ensemble of actors tell the true stories of seven real-life British servicemen – each of whom has seen active service within the last few years.  But in the first of several creative twists, the men explore their memories and emotions through a series of interviews: interviews which are piercing, even intimate at times… because they’re being conducted by their genuine wives and girlfriends.

The conversations we witness are well-chosen.  A couple of them are as you’d expect: a wounded Marine discusses the process of recovering from his injury, while an infantry soldier shares a horrifying memory of rescuing a comrade, whose bones were so badly broken he was like a “bag of jelly”.  But however much we may need to hear these stories, it’s good that they’re balanced by other and subtler debates – touching on questions of soldierly camaraderie, the difficulty of supporting friends or partners who’ve been through incomprehensible experiences, and the little-acknowledged truth that many servicemen and servicewomen actually love what they do.

The staging is subtle but clever: a table lamp spotlights the dialogue, spilled wine represents spilled blood.  The relationships between the servicemen and their partners are delicately expressed, throwing focus on both the tension in the questions and the candour of the replies.  But the big gimmick underpinning Seven – which could be made much clearer, for those who haven’t read about it in a press release – is that the actors are listening to the original recorded interviews through earpieces, echoing them in real-time on the stage.  This isn’t an entirely novel technique, but it’s put to particularly good use here, stripping the piece of its apparent theatricality and reinforcing the fact that the emotion and hesitation we’re hearing is all for real.

There’s an obvious question, of course: why?  What’s the benefit of using actors as mouthpieces, when we could simply listen to the recordings their performances aim to recreate?  But there is something special about being together in a room with a living human being, something which can never quite be captured by a recording alone.  It would be more powerful still to meet the real men and women who provided the words; but since that clearly isn’t possible, what’s offered here is the next best thing.

For me, in fact, the one disappointment came when the play diverged from this basic format, and switched to a video of the actors accompanying a soundtrack.  I’m sorry to say it, but I completely missed the point of that section; I didn’t see how the video related to what we were hearing at all.  An early gambit involving actors amongst the audience was also more of a distraction than an enhancement, though the noises off fortunately don’t last for very long.

I understand the desire to mix it up a bit, but there’s really no need; the dialogues themselves are varied ones and the core concept is compelling enough to see them through.  Overall, Seven is a riveting and insightful piece of theatre, bringing a rare sense of integrity and immediacy to its telling of these highly personal tales.  And while the words and emotion belong to the original interviewees, the actors are far more than mere puppets; through their understated, reserved, yet quietly moving performances, they truly bring these thought-provoking stories to life.

This review of a show at the Brighton Fringe 2016 was published on Tuesday 24 May.