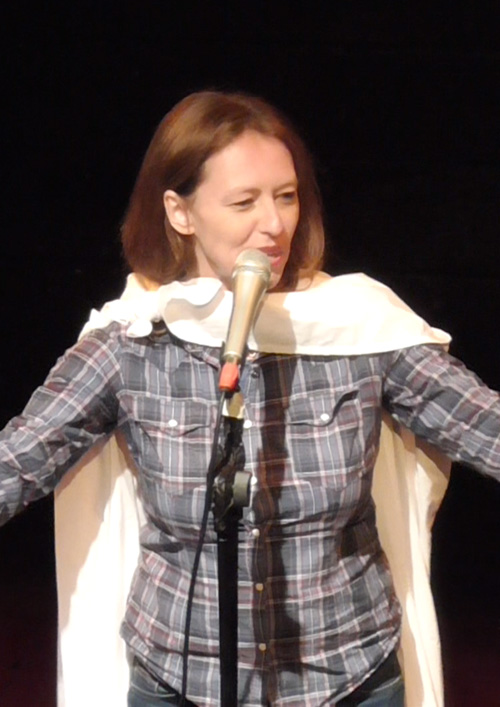 If you have ever struggled to let go and move on at the end of a relationship, you may enjoy Rosie Wilby’s one-woman, one-act show. It takes the form of a light-hearted correspondence between two female actors, one in London and the other based in Edinburgh; and the story is very accessible, because the themes of love and loss are universal. As though to prove that point, only one member of the audience I was in had never been dumped.

Wilby entertained me, and there were moments of insight and identification. For example, she poked fun at the relatively small, minority community of lesbians, and drew a distinction between ideal love and the often mundane reality of waking up next to a dishevelled partner. She discussed coming out (or not) to family, and how difficult this continues to be regardless of the law and social norms.

There were some powerful images about love: “I no longer needed oxygen, just her, deconstructed and reconstructed, limbs rearranged in the right place.” Wilby touched on the difficulty of accepting incomplete endings, and I suspect many of us have been frustrated by a partner who walks away and refuses to talk.

However, a ghost (of the relationship) spoiled the first scene for me, and continued to grate when it recurred later in a makeshift costume. The absence of any set is perhaps a missed opportunity, in what’s billed as a piece of theatre, and overall I felt that Wilby’s background in radio was evident; she just didn’t seem entirely at home on the stage.

The Conscious Uncoupling is amusing, with a premise everyone could relate to, some very good ideas and a lot of potential. Sadly, it’s let down by an unimaginative performance and presentation, and by a script that is well written but lacks dramatic power. Wilby should sharpen the humour and heighten the emotion to make this piece of theatre great.

This review of a show at the Brighton Fringe 2016 was published on Thursday 26 May.