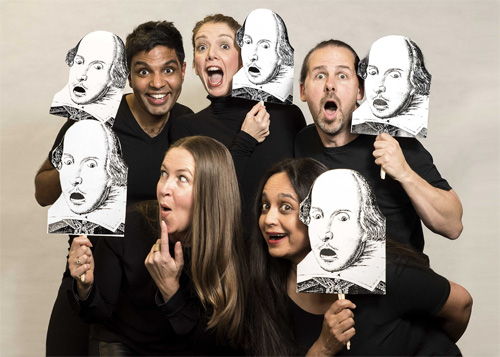 I’ll say this much for Mocketh The Weak: it’s got a brilliantly expressive title.  At one glance, you know what you’re in for; and sure enough, we’re cast as the audience in a TV studio, witnessing the filming of two episodes of a hypothetical Shakespearean panel game.  A twisted cross between Elizabethan genius and modern trash, it’s filled with Bardic barbs, period banter and frilly ruffs.

Each of the episodes, which we see “filmed” back-to-back, features two of Shakespeare’s more unfortunate characters.  We have Audrey from As You Like It; Valentine from Two Gentlemen Of Verona; Malvolio from Twelfth Night, and Margaret from Much Ado About Nothing.  Ushered on from the darkness of backstage, blinking under a harsh spotlight, each character first delivers a brief soliloquy to outline their romantic predicament.  And then, it’s the “jester” panellists’ turn to step up… and as the title implies, to mock them.

It sounds pretty cruel – like a quill-and-ink version of Jeremy Kyle – and indeed some of the goading is poignant.  Jaymes Aaron is affecting as Malvolio, still convinced of his mistress’s affections despite the barbs of panellist Feste.  Playing Feste, Navneet Seehra’s physical comedy adds a lot to that scene, as do the reactions of the host and other panellist sitting at the back of the stage.  There’s a nice side joke too from actor Srabani Sen – who is (in character) completely out of her depth in the host’s role, and whose panicky fixed smiles and restless re-organisation of props help bring life to the framing device of a TV show.

The “mocking” itself is generally a heavily-edited version of the relevant Shakespearean text, with occasional between-the-scenes incursions of lines from other plays.  Which poses the question: why?  Why rip this material out of its context, and present it in this particular way?  A lot is clearly lost in the transition.  Still, the experiment is an interesting one, drawing parallels between the bear-pit atmosphere of a Shakespeare-era theatre and the gladiatorial TV shows of our present day.  It also throws focus on Shakespeare’s maybe-undervalued jesters – who for once are elevated to centre stage, Bardic bawdy and all.

Outside of Shakespeare’s original scenes, the cod-Elizabethan language feels a little stilted, and the catchphrases which define the supposed TV show become wearing with repetition.  It’s also, paradoxically, somewhat inaccessible; unless you’re already familiar with the detail of the source works, you’ll have to concentrate hard to pick up what’s going on.

So there’s a worthwhile concept here, but it needs something more, something to make it into a rounded production.  Indeed, they finished a good 20 minutes short of their advertised one-hour running time, perhaps a tacit acknowledgement that the core format isn’t quite enough to sustain them.  Some of the funniest visual gags came from the interactions between the panellists, and I also liked Catriona Clancy as the chirpily efficient floor manager; more of that, maybe revealing back-stage relationships or tensions, would help add some variety and texture to the show.  For now, this is an interesting late-night option for Shakespeare geeks… but it needs some re-thinking to appeal to a wider crowd.

This review of a show at the Brighton Fringe 2016 was published on Sunday 15 May.