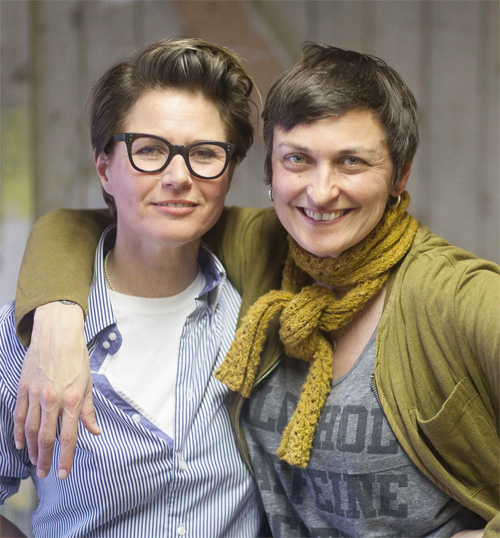 Shrouded in darkness, two soldiers step onto the stage… then as the lights come up, it is clear that they are both women in drag. In true music-hall style, they sing to the audience about love, love and more love, and then we witness them back-stage as they put their act to bed and change back into their daily attire. They share with us the stories of the women that have inspired them in their lives, and influenced their decisions. One of them is Hetty King, a male impersonator whose career spanned both World Wars and was still entertaining the crowds in her late eighties.

We hear some very personal stories of “first loves”.  One, shared quite eagerly, seemed so “awkwardly perfect”; the other is far more halting and stands in complete contrast, with a heart broken into “fragmented ugly pieces”. I doubt that there was anybody in the audience who couldn't identify with, or wasn't touched by, both the joy and the pain in these stories.

The two performers (Jo Merriman and Louise Miller) share a highly naturalistic storytelling style, making the play engaging from the outset. There is an obvious ease between them, making it easy for the audience to enjoy themselves as much as it seems the actors are. The narrative flows smoothly and, as both characters warm up, becomes ever more watchable; I was genuinely fascinated about what might happen next.

Both women have great singing voices too. Accompanied by the dapper Anthony Stubbs on keyboards, their harmonies and vocal range were used to their full glory to recreate a favourite song of Hetty King's, Piccadilly.

In terms of staging, it seems that less is more: there is absolutely no set, just an old suitcase, two chairs and effective costume changes. But that proves a smart decision, as the feel of the old-time music halls is captured by the sheer energy and conviction of the two women on stage. Miller provides the essence of a less confident late developer, testing out her sexuality; Merriman captures a, dare I say it, cockier persona with every mannerism and posture of her body.  Director Stephen Farrier adds a clever split focus as well, with one actor telling the story while the other plays all the other roles alongside them.

The ending was a little predictable – although I have to admit it was also exactly right. There was an almost audible sigh from the audience along with me as the metaphorical curtain came down. This pleasing piece of devised theatre, inspired by true life events, was beautifully acted, sensitively directed and very thoughtfully put together; Hetty herself might have been pleased to see that her legacy lives on.

This review of a show at the Brighton Fringe 2016 was published on Saturday 11 June.