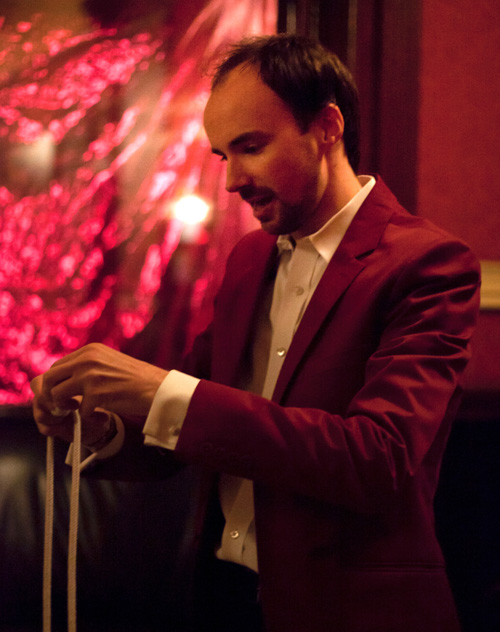 Stage magic’s experiencing a renaissance these days, with most acts – from big names like Dynamo down to newcomer Fringe performers – staking their names and reputations on an eye-catching spin.  Caspar Thomas’s show, in contrast, is resolutely traditional, and it’s none the worse for that.  It’s a true pleasure to spend an hour in Thomas’s wittily self-deprecating company; and the unpretentious style throws the focus firmly on his tricks, which are pleasingly befuddling too.

Thomas’s first act of deception is a curious one: pretending to be far less charismatic than he actually is.  His intentionally diffident stage persona is anything but attention-grabbing, but his modest manner quickly grows on you, and within a few minutes the whole crowded room was clearly on his side.  It helps that he’s got some properly funny material, too; he disguises it among a procession of dad jokes, but they invariably culminate in a fresh and rib-tickling line.

As the show’s title suggests, Thomas draws from two contrasting styles of magic.  Most of the act is built around good old-fashioned sleight of hand: think disappearing cards, ropes that can’t be cut, and a newspaper that’s torn up and restored.  There’s nothing hugely original about any of this – almost all of the tricks are ones I’ve seen many times before – but the execution is spot-on, triggering that pleasing sense that something literally impossible has just happened before your eyes.  It’s sometimes said that if you see a trick three times, you’ll figure out how it’s done; yet Thomas performs his final illusion no less than ten times in a row, and I still couldn’t spot the sneaky move.

The other part of the show tackles mentalism: mind-reading, prediction, and purported psychic control.  It’s partly a matter of taste, but this material was less successful for me, and a couple of the tricks in particular don’t stand up to more than a few seconds of critical thought.  The audience around me lapped them up all the same, but a touch more drama – the archetypal envelope left in full view and ceremonially opened at the end – might still have added something here.

At times, then, I did hanker after more pizazz.  But Thomas is comfortable with his audience – delivering quick-witted responses to unexpected remarks – and he certainly has the knack of putting his “volunteers” at ease.   In the end, while he doesn’t have the showmanship or in-your-face bravado of many contemporary magicians, he knows how to please a crowd which remembers the golden age of magic on TV.  All in all, this is an impressive hour of illusion… and it’s run though with a loveable humour, too.

This review of a show at the Brighton Fringe 2016 was published on Sunday 29 May.