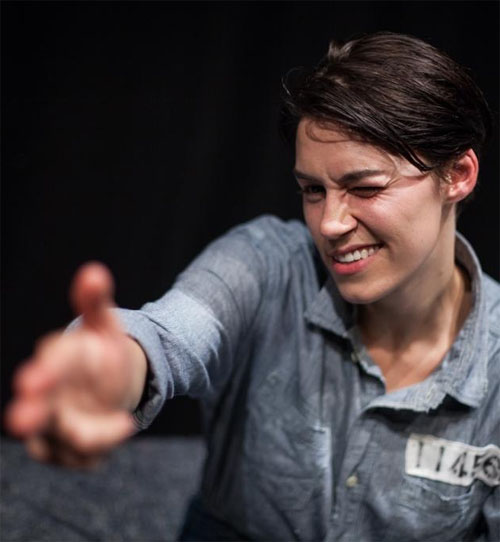 The door slams closed and the lights come up, on a steel-framed bed in a featureless cell.  A woman – androgynous but attractive – perches on the mattress; an identity number’s stitched onto her drab prison clothes.  This is Elyese Dukie, a self-confessed murderer, convicted and condemned to the electric chair.  Her seven-year court process is over now.  Very soon, perhaps tomorrow, she will die.

But wait.  If Elyese Dukie is the woman in the cell, then who is John Hayes?  That’s just one of the mysteries to be slowly teased out in this fascinating, riddling play.  Dukie’s naturalistic monologue reveals her story slowly, with each carefully-measured revelation transforming our understanding of the crime that has occurred.  You’ll need to engage your brain to piece the narrative together; it’s a detective story in reverse, where the puzzle isn’t whodunnit, but exactly what has been done.

And why it’s been done, of course.  That question proves the hardest to answer, and perhaps Dukie herself only partially knows.  The case she puts before us is a poignant one: a story of sexual confusion, forbidden love, and maybe – just maybe – a justified crime.  It paints a vivid picture of an alien world, where morality works differently and a beautiful weapon is a thing to be admired.  It’s a story of regret, though not of remorse… and it might, of course, all be lies.

Playwright Lucy Roslin is the sole performer too, and her acting held me enthralled as much as her writing kept me guessing.  It’s an unforced, desperately believable portrayal, which flows between horrifying callousness and poignant vulnerability.  We’re told we’re in the condemned woman’s cell, but it has the feel of a late-night chat with a troubled friend – and because the house lights are on for most of the time, there’s nowhere for any of us to hide.

If I’ve one criticism to make, it’s that 1950’s Texas seems surprisingly unshocked by Dukie’s unconventional sexuality; beyond a brief reference to the newspapers, there’s little sense of the scandal which would surely have engulfed her.  But the script’s already chock-full of challenging ideas: among them, the question of how the law can protect those who refuse to defend themselves.  Dukie knows what she needs to say to escape her fate, but there are also reasons – disturbingly well-argued reasons – why she prefers the electric chair.

Though intense, the monologue is often very funny, with death-row humour offering a well-judged counterpoint to the ever-looming darkness.  And even when Dukie isn’t consciously joking there’s an easy lightness to her monologue, which makes this an accessible play despite its immensely challenging subject matter.  The script doesn’t reach many conclusions, and in the end – as with many celebrated cases from real life – the truth remains obscure.  But for me, at least, that’s no disappointment: it’s enough to be posed such complex, unexpected questions.