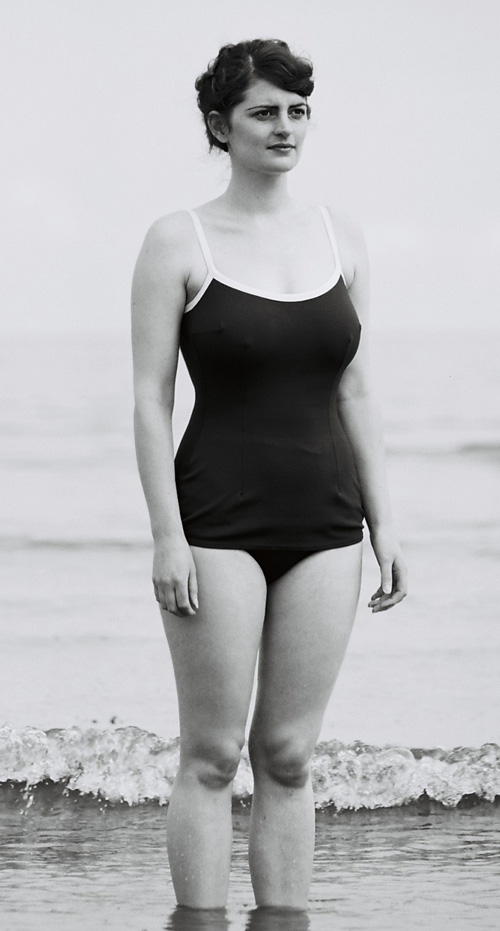 Waves made me happy.  So, so happy.  It’s a play which starts in stillness and sadness – yet soars across oceans once its imagination takes flight.  It’s a fanciful tale of tragedy and redemption, built around a tiny detail of history, the invention of the butterfly stroke in 1933.  It’s the parable of a little girl who wanted to swim like a dolphin… and who in the end, in a manner of speaking, did.

Creator Alice Mary Cooper has an understated but highly distinctive performance style, merging elements of storytelling, acting and physical theatre.  Her frequent repetitions give her words a reassuring rhythm, echoing the simple strokes which drive a swimmer through the water, or the seductive ebb and flow of the sea.  But there are sudden, dramatic shifts in tone as well – always startling but never gimmicky – including one which displays a truly magical sensitivity to the acoustic of the room she’s performing in.

And she’s gifted herself a beautiful script: subtly evocative, quietly poignant and never afraid to be playful.  It tells the tale of a girl called Elizabeth, who lives on a tiny island and has never learned to swim.  But something happens to transform Elizabeth’s life – and she comes to view the sea as a companion, a confidant, perhaps even a friend.  She yearns to be at one with it, and… well, I think I’ll leave it there.  It’s impossible ever to guess where Cooper’s narrative is heading: it’s wildly fictitious, even though it rings so very true.

My attention did drift a little in the earlier scenes, and on isolated occasions Cooper’s storytelling lapsed into the style of children’s TV.  But my only real quibble with Waves is a more philosophical one.  By fictionalising the development of the butterfly stroke, Cooper arguably deprives its true inventor of the recognition he (yes, he) deserves.  I’ve no problem at all with invented histories – but I do think it behoves their creators to signal clearly when they’re parting from fact.

But I’ll forgive that slight transgression, because Waves’ underlying message is such a wonderfully positive one.  It’s not about wishing on a star, but it is about believing in a dream – and using that belief to work so hard, that you achieve what was surely impossible.  It’s a play about a girl who grew “strong and invincible”, and a cheerful old lady who never forgot the things that she’d loved.  And it closes as it must, with the end of a journey, and the comforting rhythm of the all-embracing sea.

This review of a show at the Brighton Fringe 2014 was published on Saturday 17 May.

The Burrow at the Warren