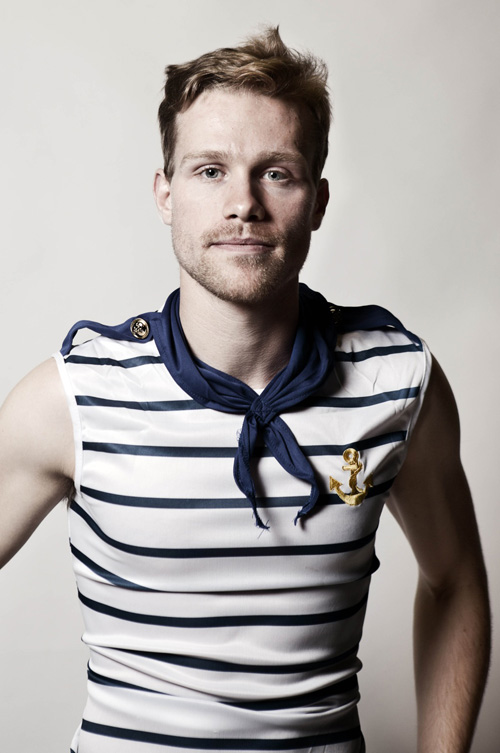 Liam Rudden’s Thief is a horrible, horrible play.  It made me cringe into my seat and cover my eyes – not because it pulls embarrassing tricks, but because it tells some terrifying truths.  It sent me reeling out into the street, desperate to find some scrap of humanity to counteract the coldness at its heart.  It’s planted images at the forefront of my mind which I wish to God I could scour out again.  And you should definitely go to see it.

Because the images that haunt me aren’t the ones I’d bargained for.  Yes, Thief’s protagonist is a low-class rent boy; and yes, there is a fair amount of nakedness to go with its explicit themes.  But the real squalor depicted by Rudden’s uncompromising script isn’t of the sexual kind.  What’s scarring is its vision of a world without friendship, and its hideous portrayal of a brutally damaged man.

Loosely based on real-world vagabond Jean Genet, the protagonist – known as Sailor – lives off rough sex with men, even though he doesn’t describe himself as gay.  He’s a thief and a blackmailer, who’s suffered and perpetrated chilling violence and can tell both types of tale without a flinch.  He’s forever a traitor, and forever betrayed.  How did it come to this?

The task of answering that question falls to lone actor Matt Robertson, whose confident portrayal quickly made me warm to his difficult, seemingly amoral, character.  On the night I attended, Robertson rushed a few lines, and the lengthy segments spoken directly to the audience were a little too even in delivery.  But he excels when he’s acting out Sailor’s dark memories, revealing the deep-seated hurt beneath the swaggering exterior.

The most unwatchable scene – the one it’ll take me a long, long time to forget – lets us into the secret of how Sailor comforts himself, a characteristic sadly shared by countless people who are nothing like him at all.  And that’s part of Thief’s scary power: it manages to plant a seed of understanding that, if the cards had fallen a little bit differently, the soulless world Sailor inhabits could be your own home.

But the strength of that particular moment overpowers what follows, segueing into a character-defining description of Sailor’s childhood which demanded more attention and compassion than I had left to give.  And I can’t help thinking that this play would be better without its final scene.  There’s a hint of the deus ex machina about it – and in any case, some fates are better left imagined.

So there’s room for a little tweaking, but Thief is a powerful, harrowing play, which highlights everything that’s good in our world by showing us a reality without it.  “Maybe you understood me a little,” says Sailor at the end.  Thanks to Rudden’s script and Robertson’s acting, I think perhaps I understood him all too well.

This review of a show at the Brighton Fringe 2014 was published on Friday 16 May.