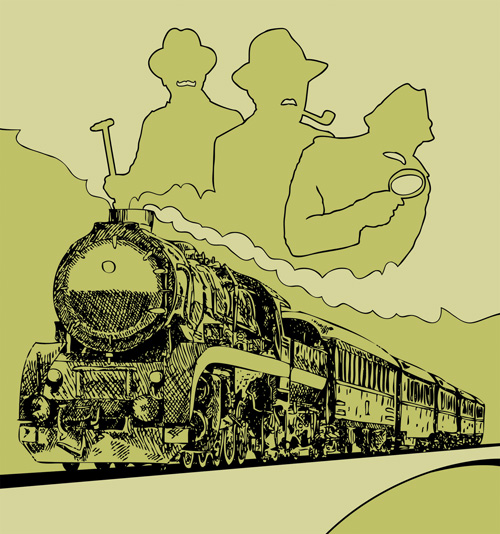 The most mysterious thing about the Indigo Star is that a plainly-competent theatre company has managed to deliver such an unthinkably disappointing show.  I’ve always believed it’s part of the reviewer’s craft to find a positive in everything – to offer a few words of comfort and support, even when everyone knows a work has gone awry.  On this occasion, though, I must throw my hands up.  This play is simply bad.

Sherlock Holmes has been murdered in Paris – and Poirot, Clouseau and Maigret all find themselves in pursuit of the culprit.  (Never mind that Holmes’ last case pre-dates Clouseau’s first by thirty-six years.  A confused timeline is the least of my concerns.)  Following a clue at the crime scene, they all rush to board the Orient Express to Venice, where the three great detectives handily find themselves seated in the same compartment.  And then… virtually nothing happens!  For the better part of two hours!  Waiting For Godot seems action-packed by comparison.

Classic detective stories, of course, have to play by certain well-known rules.  Alas, the rules of Indigo Star appear to be that any significant plot point – no matter how self-evident or straightforward – must be repeated at least four times.  And that’s not the only way that the story crawls along at the pace of a wheezing stopping train.  Each of the three detectives takes turns to deliver a lengthy monologue, in which they précis the plot of one of their most famous cases… before concluding that it couldn’t possibly have anything to do with the matter at hand.

Exposition’s heavy-handed – at one point they read the back-story aloud off pieces of paper – and dynamism is almost non-existent.  There are occasional flurries of activity, including a few moments of satisfying physical comedy, but sadly these over-the-top surprises serve mainly to highlight the turgid pace of the rest of the play.  Towards the end, when (spoiler alert!) I realised they were going to present three lengthy alternative endings, it took all the inner strength I could muster to stop my little grey cells from rebelling in horror and shutting down.

The actors seem pretty capable, and have successfully captured at least the best-known mannerisms of their respective detectives.  I liked John Doull’s Maigret, played with just a touch of hurt and vulnerability, aided perhaps by the fact he’s the most rounded of the original characters.  But there are interesting possibilities around the rivalry between great minds which emerge only briefly, and only towards the end.

The dénouement takes preposterous liberties with well-loved characters and, adding insult to injury, the whole thing overran by 15 minutes – a problem they could fix at a stroke by cutting the unnecessary interval.  It’s tempting to say this play’s a train-wreck, but it’s not as noteworthy as that.  It’s leaves on the line, a broken-down locomotive, a signal failure.  Don’t even think of watching it.

This review of a show at the Brighton Fringe 2014 was published on Sunday 25 May.