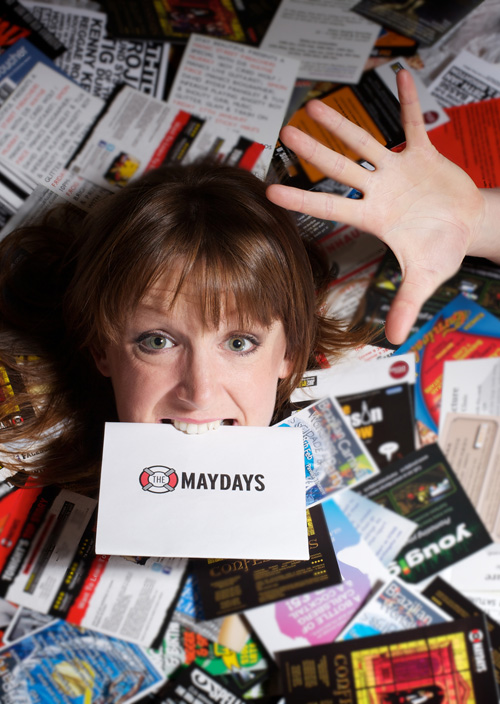 After a warm greeting from improv troupe The Maydays, I was presented with a card with a series of questions.  “What was your life like ten years ago?”  “What was your most significant year of the last decade and why?”  The theme’s taken from The Maydays’ ten-year anniversary, and the basic premise is that the answers on the cards provide the improvisational material for the actors.

Those five actors (John Cremer, Rebecca MacMillan, Jules Munns, Jen Rowe and Heather Urqhart) and their pianist (Joe Samuel) immediately created an upbeat atmosphere, full of energy and vitality. They responded quickly to each other and, in true improv style, they complemented each other’s ideas and each added something to the mix.

The offers from the audience were extremely varied, and the team consistently conjured amusing scenarios from nowhere. One highlight for me was the scene in which an actor found themselves singing a song in a Spanish accent, whilst the rest of the cast acted as backing singers and threw themselves into much stamping, castanet clicking and “ollaying”. The spectacle was hilarious.

There were moments when it felt as if the actors had lost their way a little, and a couple of the stories could have been shorter. But that’s the way improv is: with no script, you are always searching for the punchline.

So there was plenty of “laughter and joy” in the show, but I could not quite spot the “sadness and nostalgia” also billed in the flyers.  The very first card they picked out of the bucket tackled the fourth and final question, “What is your biggest regret?”, and the audience member who filled in the answer had “lost their soul mate through their own distracted stupidity.”  The Maydays appeared to play it for laughs, and while most of the crowd seemed to enjoy it, I struggled to laugh along with them at the flippant jokes about the “despair, loneliness and suicidal thoughts” the written answer candidly revealed.

Perhaps in the adrenaline-charged opening moments, the team simply didn’t stop to consider that this might be a sincere story, which could be delivered in a more sensitive way.  But by describing their show the terms they have done, and by asking a question which suggests a serious answer, The Maydays are inviting trust.  Someone in the audience had the courage to offer what seemed like a truly meaningful story – and they deserved a more respectful response.

It’s unlucky that this particular card came out of the bucket first, at exactly the moment when an upbeat opening was required. But it’s up to The Maydays to plan for the chance that this might happen. I would have been happy to see the team acknowledge what was written, and make it clear that they would return to the story at a more appropriate moment. Or they could avoid the problem altogether, and mix up the tone of the evening, by finding a vehicle to sort out the answers and thereby focus on one question at a time.

All in all, although I appreciated the humour in the work, there was a missed opportunity to demonstrate the range of their skills and live up to the billing in the programme.  Despite this, the Maydays for me remain a skilled and energetic troupe, committed to giving the best comedy entertainment to their audiences that they can. If it is an evening of laughter that you are looking for, then this is the show for you. And I hope they continue to run for another ten years.