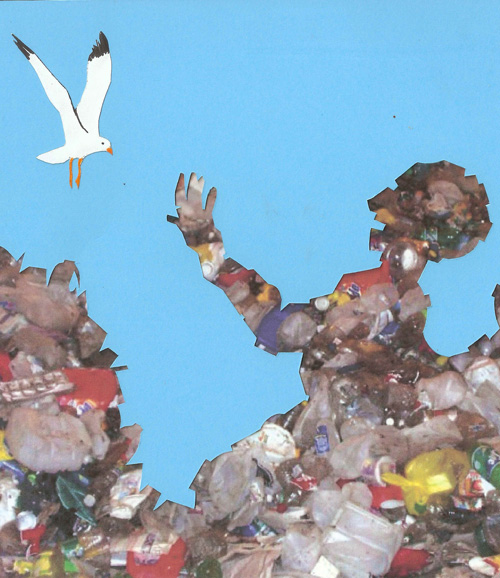 The Invisible Giant is a piece of physical theatre which enchants from start to finish. The four actors (Florencia Leon, Ben Macfadyen, Persephone Pearl and Lex Titterington) grasped my attention from the opening moments, when they appeared dirty and dishevelled, dressed only in boilersuits and head torches. They were miners searching for clues amongst the rubbish, seeking the Invisible Giant, who once existed in the Age of Plastic.

They inhabit a world where black bin-liners can turn into babies, squawking birds and karate kicking targets. Every scrap of plastic bag, toy and yoghurt pot might reveal some important clue to the legend of the Invisible Giant, and it’s through these objects that the story unfolds. We learn that a young couple first discovered the Invisible Giant, as a baby inside one of their rubbish bags, and they kept him locked up as their secret. Until one day, befriended by a seagull, he understood the desire to escape… and did just that.

There were so many highlights in this production that it’s hard to know where to begin.  I loved the dance courtship ritual, where dustbin lids became motorbike visors, and plastic blinds turn into mirrors of love. The moment when a seamless quilt of plastic bags gave birth to the fully-grown giant was awe-inspiring; bath-time for the baby giant was beautifully touching. The plastic sheet used as the wedding veil, revealed at first as a symbol of happiness and ending as a choking force within the relationship, was heartbreaking. When the same plastic sheet was used to create underwater effects, taking us to another world where whales pass by whilst miniature giants fly over head, it was nothing short of genius. With the clever use of lighting, the effect was breathtaking.

The only spoken words come at the beginning and end, directly addressing the audience, and this decision gave the whole production so much more power. The cast skilfully conveyed their message through just the use of gentle noises, sign language, and an exciting sound track. The evocation of the ever-growing giant through puppetry was delightful, and from the giant’s first appearance as a baby to his fully-grown persona, the company showed their skill and expertise at every turn.

If there’s one thing I might query though, it’s the ending. It happened so quickly that if you blinked, you might just miss it.  I wonder if it needs to be just a little clearer what took place, especially for the younger members of the audience.

Despite this, The Invisible Giant is a beautifully-crafted and faultlessly-executed piece of theatre. The company was slick, tight and impressive, creating together a mesmerising performance for the audience. I sat amongst a lot of children in the show that I saw, and at times you truly could have heard a pin drop, they were so engaged. This is a multi-layered story with many messages lying within it, and is a production that I hope will run and run. And one thing’s for certain: I know that it will be impossible to look at carrier bags from the supermarket in quite the same way again.

This review of a show at the Brighton Fringe 2014 was published on Monday 26 May.