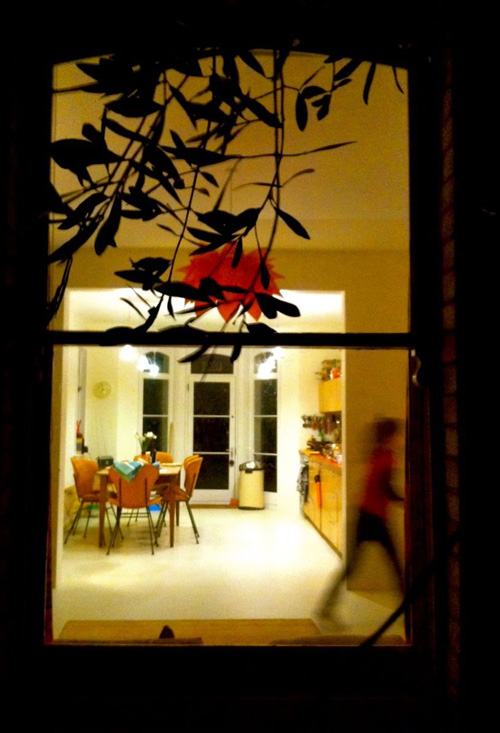 Set in a genuine family home, The Brighton Laboratory’s House Project follows the lives of a thespian couple and their children, as they grow up and grow old together.  Cleverly, it starts with the sense of an ending: we arrive at the house to find it’s up for sale, with a nicely-observed pair of “estate agents” waiting to greet us at the door.  As they lead us on our “viewing”, we see ghosts from the past – echoes of what’s happened in the building over the last twenty-odd years – all adding up to a sad-but-inevitable explanation of why such a desirable property is standing empty now.

The trip round the house splits into two distinct parts.  Downstairs, the estate agents guide us expertly round a series of 10-minute scenes, each matched to one of the house’s real-life rooms.  Best among these is a poignant monologue from local legend Shirley Jaffe, who plays ageing owner Katherine as she prepares to depart for a nursing home.  There’s a delicacy to both script and performance here, using the detritus of a lifetime to make some finely-balanced points about the things that stay important in life.  Jaffe also plays her part in a well-worked ending, which neatly highlights that the excitement of moving into a new home is always at the cost of someone else’s departure.

The other two downstairs scenes are rather less satisfying.  In the garage, we find two sisters locked in a spiky half-squabble, as they clear out cherished possessions from their former family home.  It’s highly realistic, but doesn’t connect well enough with the rest of the narrative to make complete sense to me.  In the kitchen, meanwhile, there’s a rather peculiar fourth-wall-busting monologue, which seems to take it as read that middle-class people aren’t very nice to Eastern European cleaners.  I’m not sure I completely accept that assumption – and I am sure it’s a topic which needs to be tackled with much more subtlety than the charity-ad fodder offered here.

Once it’s time to head upstairs, both the setting and the rules of engagement change.  Now we’re watching memories from a decade or more ago, featuring younger versions of Katherine and also introducing members of her family.  What’s more, rather than being shepherded by the estate agents, we’re free to stroll into or out of any of the simultaneous performances – leaving each member of the audience to construct his or her own narrative from the clues planted by the individual scenes.

On paper, that sounds a brilliant idea.  But The Brighton Laboratory are far from the first company to discover the flaw in this approach: it’s entirely possible to have your experience spoiled by simple bad luck.  Throughout my time upstairs, I had the sense that I was arriving just as a scene was ending, or that I was hanging round hoping something might happen while a more important storyline was playing out elsewhere.  Since seeing the play, I’ve learned there was a tragedy in Katherine’s life which I simply didn’t notice – possibly because I was sitting in a different room waiting for another character to get out of bed.

There are a few inspired touches, including the incursion of a character from the 1990’s into a scene set in the modern day, and the clever use of a TV in a living room to play out a memory from the departing matriarch’s past.  But in the end this is a triumph of form over narrative, and work of this form is especially difficult to do well.  Overall, The House Project was a memorable experience but alas, not a theatrical treat.

This review of a show at the Brighton Fringe 2014 was published on Monday 9 June.