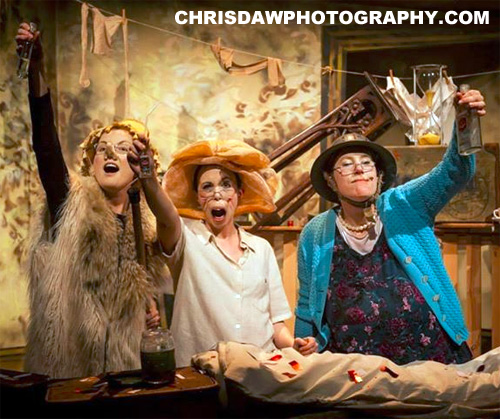 This sweet, playful, uncomplicated show is an unexpected treat, filled with unforced comedy and gentle physical humour.  Hot Coals Theatre Ensemble have devised a suitably warming tale, which knows how to tweak the heart-strings while staying light and nimble, too.  Though the pace occasionally flags, Storm In A Teacup is an exciting production from a young but clearly-talented company.

The programme says it’s based on Chekov’s Three Sisters – but aside from the characters’ names and some matryoshka in the background, I’m not sure how you’d ever know.  That doesn’t matter in the slightest though, since this big-hearted tale of companionship in later life stands up perfectly well on its own.  It’s a deeply old-school production – reminiscent at times of a silent movie – with a well-chosen score setting the tone for an entertaining, largely carefree, highly visual show.

All of the actors deliver faultless performances, and all imbue their characters with distinctively likeable charm.  Though they’re young performers, they’re remarkably believable as elderly women; the way they shape their bodies as they grow old together is an elegant early highlight.  Each of the women has a trademark facial expression, which together convey a delightful sense of reined-back mischief, and a constant reminder that life needn’t be less joyful as we enter our final years.

But inevitably, there’s a threat to the sisters’ pleasant world: a secret they share, yet are all trying to hide.  Here, too, Hot Coals have the wisdom to keep things simple; despite a relative lack of spoken dialogue, there’s never a moment’s doubt about what’s going on.  But if the plot’s conveyed in broad strokes, there’s no shortage of detailed brushwork, and it’s the little embellishments which truly elevate this show.  There’s a beautiful humour in the failure to blow out a candle, or the way one of the sisters makes a ridiculously weak cup of tea.

A few scenes do grow repetitive, and deserve to be played more strongly or developed a little more.  And it feels like there’s not quite enough plot to fill the running time; I suspect it could be trimmed to a tighter, punchier fifty minutes, without really losing anything at all.

But the conclusion, when it comes, is genuinely touching.  The humour turns bittersweet as the sisters’ world finally implodes; a cleverly-conceived vision of their future segues into a final act of defiance, before the storyline wraps up in the way it was always destined to end.  The emotional impact is undeniable – but I’ll remember Storm In A Teacup most for its fun-loving, positive portrayal of affection in old age.  This is a genuinely life-affirming show, the perfect match for this sunny springtime.

This review of a show at the Brighton Fringe 2014 was published on Sunday 4 May.