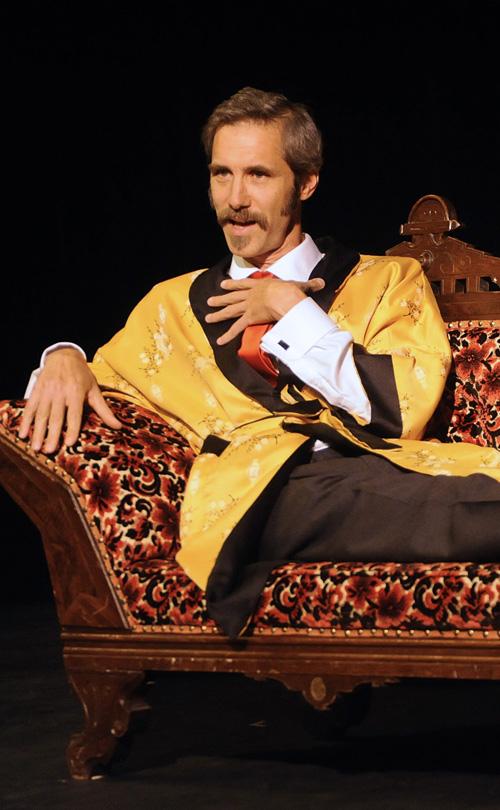 There’s a lot of love in Normal Heights.  Most obviously, it tells of the lifelong partnership between two gay men, who grew up in the age when such love was forbidden.  But even more beautifully than that, we see the mutual affection between an uncle and a nephew – who come to share secrets they’ve long kept concealed, reaching out to each other across the generations and the years.  And it’s all done in the form of a light-hearted musical.

The storyline’s a simple but effective one.  Nearing the end of his life, Uncle Edward swaps letters with his nephew Jimmy, gently guiding the younger man through the emotional turmoil of the first flush of love.  (Jimmy, by the way, is a man who prefers women – making this one of very few scripts to celebrate gay and straight companionship in equal measure.)  As time goes on, we learn more about Edward’s past and imminent future, aided by Jimmy’s recollections of the all-American family scandal his uncle’s homosexuality caused.

The plot is sweet, but the songs are spiky, using humour to deliver powerful messages which could easily sound preachy if performed without a smile.  Some of the numbers ridicule the prevailing morality of Edward’s early life, while others act as a kind of manifesto – an urgent exhortation to follow the calling of your heart.  Mixed in among it are a few genuine insights: Edward’s description of a hesitant teenager cruising in a park is particularly touching, explaining how, for that moment at least, sex was really the last thing on his mind.

Jim Walker, who performs all the roles, has a confident and personable stage presence – working a couple of distractions seamlessly into his act, and riffing in character during a brief audience-interaction scene.  He has a good singing voice, and shares the limelight selflessly with his pianist, Adam Walker.  At a razor-sharp 50 minutes, this is one show that knows not to outstay its welcome, though I did sometimes wish Walker had taken things more slowly; I missed a few jokes as the tightly-scripted lyrics zipped by.  And the switches between characters are occasionally confusing.  I’d figured them out by the end, but could have done with clearer signposting to keep things in order early on.

But the nicest compliment I can pay Normal Heights is to say that I hadn’t realised it was an original work.  I’d assumed it was a stripped-down version of something from off-Broadway, but no: it’s Walker’s own creation, written together with composer Gary Grundei.  And when you read the notes on the inside of the programme, you’ll discover why it’s a story he felt moved to tell.  This is a pithy, affecting production, which dares to speak – as it says we all should – directly from the heart.

This review of a show at the Brighton Fringe 2014 was published on Saturday 17 May.