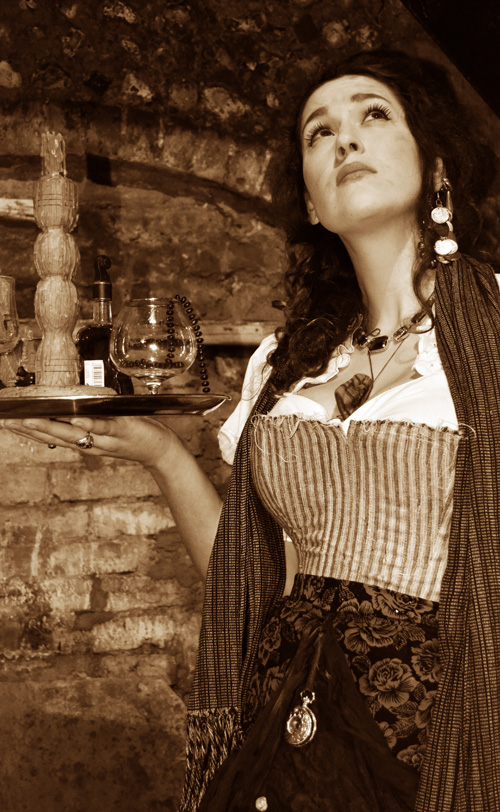 As we stepped out of the light into a candlelit auditorium, the cast were already on stage, looking all the way like Victorian Music Hall stars. With scattered vintage props placed strategically on the audience’s tables, I felt as though I’d wandered into a scene from a Dickens novel.  The atmosphere is perfect.

It sets up the compère Charlotte Dearing for her appeal to “show some love” to the acts we are about to witness, neatly leading into a rendition by the whole cast of the Beatles classic All You Need is Love. And what follows is a series of familiar songs from well-known musicals, linked loosely together by Dearing. Particularly strong was the rousing version of Diamonds are a Girl’s Best Friend by Sophia Handscomb and Mattu Mannah, which even Marilyn Monroe herself would have approved of.

But after the sixth song, and with little action taking place, I started to wonder when the “inspired debauchery” described in the glossy programme would emerge. Halfway through the second part of the show, there was a mesmerizing display of hula hooping by Melanie Kalay. A further highlight was the all-too-brief demonstration of seductive pole dancing to the tune of It's a Man's World, performed again by Mannah. If ever there was a time to leave your audience hungry for more, it was then.

The young cast were enthusiastic, earnest and could most certainly sing, while the accompanying musicians (Nadia Bunker and Jamie Wallis) added beautifully to the production. However, I did feel a little short-changed by the lack of the “thought provoking” content that was promised.  As a late-night show, this needs to be a little braver and scarier, to dare to take its audiences to darker places. They could maybe build on the Charlie Chaplinesque character (played by Coco Hennessy), who presented a little more of the Music Hall type, a slightly strange and edgy presence that lingered throughout the production.

The intervention of modern numbers such as Jessie J's Price Tag also felt out of keeping with the theme of the evening. On the other hand, I found my toes tapping to some of the songs, and it was clear that the audience were enjoying what was on offer. All in all, it was a sweet Night at The Music Hall – and I left with the words of the big finale ringing in my ears, re-visiting the opening number All You Need is Love. There was certainly plenty of love from the audience. Perhaps they're right after all.

This review of a show at the Brighton Fringe 2014 was published on Wednesday 7 May.