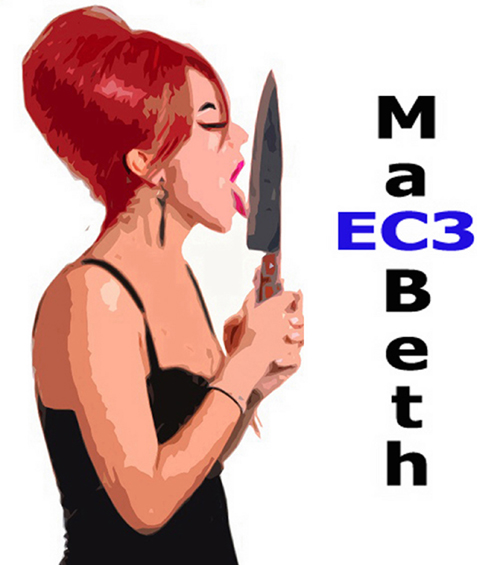 It all sounds so promising.  In 1960’s East End London, in the midst of a vicious gang war, hard-man Duncan installs a feisty new landlady to run the Cawdor Arms.  But behind his back, a cabal of gossiping charladies have twisted his protégé’s ear – and when he foolishly chooses to spend a night at the Cawdor, Duncan’s violent past finally overtakes him.

I know this from reading Ma Beth’s programme blurb, yet I defy anyone to figure it out by actually watching the play.  Dark Desire’s approach to the text is faithful to a fault; we still have thanes, and courts, and castles, no matter how little sense these concepts might make in the London of the Krays.  Duncan appears to be a nightclub owner, but also literally a Scottish king.  Macduff even flees to England – seemingly having completely forgotten that the whole play’s set in EC3.

There’s one tweak, though, that it’s impossible to overlook: Macbeth himself doesn’t feature at all.  Instead, he and his wife are rolled into a single woman – the titular Ma Beth – with their conversations becoming an internal monologue, sometimes facilitated by a photograph or a mirror.  And a lot of the time, this radical alteration works surprisingly well.  As a demonstration that the two characters reflect a shared personality, Ma Beth unambiguously succeeds.

But any time the script throws up interesting issues, the production ducks them.  When it becomes too inconvenient for the Macbeths to speak as one, other characters simply take over some of their lines.  I was intrigued by what they’d do with Lady Macbeth’s death – would it signify a crucial change in Ma Bath’s personality? – but in the end, they just left it out altogether.

And very oddly, though the play’s set at the height of the sexual revolution, Ma Beth’s gender doesn’t seem to be an issue at all.  A strongman dies and a woman takes over.  Nobody raises an eyebrow at that.

So we’re left with a modern-dress, gender-blind, but otherwise conventional Macbeth.  And as Macbeths go, this is really pretty average.  Several actors struggle to be audible, and most of the soliloquies are rushed.  Characters wander out of the spotlights while crux scenes are performed in half-darkness.  Off-stage actors are distractingly visible as they walk around the wings.

Frustratingly though, there are occasional glimpses of the thought-provoking production this could have been.  The Three Witches are a delight, cast as alcoholic charladies who sip their potions from a paper bag.  Fleance is made a more rounded character, and elevated to an unexpectedly fitting role in the concluding scenes.  And during Ma Beth’s desperate last stand, it suddenly becomes both striking and daring that a woman should defy an army of men.

But for an hour-and-twenty-minute play, these morsels of interest are slim pickings indeed.  There’s no shame at all when a bold experiment fails, but Ma Beth is something far worse: a half-hearted treatment of a fascinating concept, which could and should have attempted so much more.