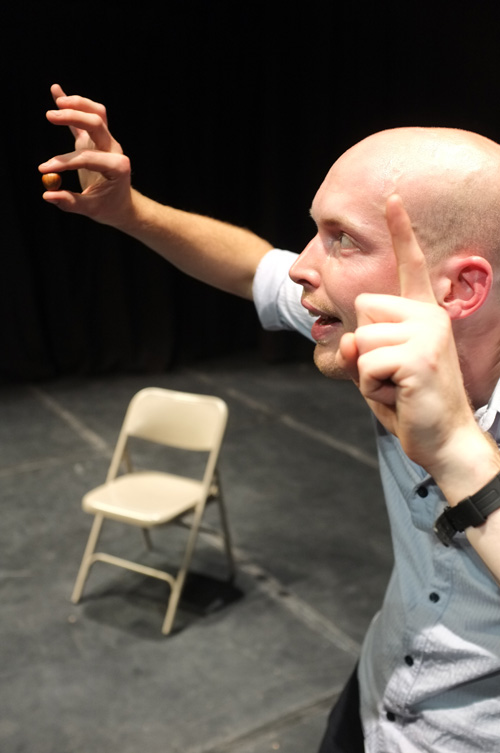 Get Lost, Lancelot is a stunningly creative and ambitious show.  Halfway between stand-up comedy and one-man theatre, it’s a great choice for the regular Fringe-goer, filled with biting commentary on the kinds of work you typically find stuffed into a room behind a pub.  But there’s a point to it as well – a gentle reminder that grown-ups should remember how to play – and the whole thing’s nicely framed by a credible, rather touching, tale.

Some of Quinn’s simpler ideas are executed extremely well.  Right at the very start, an audio voice-over reveals his character’s inner doubts – hardly an innovative technique, but Quinn synchronises his facial expressions so perfectly that I really did come to accept I was listening to the voice inside his head.  Later, there’s a nice moment of interactivity, when selected audience members are invited to hurl imaginary stones.  It seems good fun, but like much of Quinn’s narrative, there turns out to be a hint of darkness to that particular game.

There are many, many clever concepts worked into the narrative too.  When Quinn swears off his imaginary friends, he finds his brain now summons unimaginative stereotypes.  Later, he joins Imagineers Anonymous and brings the whole audience into his first support meeting.  At one stage he asked me whether I believed in an imaginary pea – and through the magic of theatre, I had to admit that I sort-of did.

So I applaud and celebrate this show… but I can’t quite bring myself to love it, yet.  It’s just too inaccessible at times; too difficult to properly grip onto.  A lengthy absurdist story about a nut falling from a tree came close to losing me completely (though there’s the possibility that’s deliberate, since it leads on to a hilarious deconstruction of what it’s like to watch bad theatre).  And even later, when Quinn had me thoroughly on his side, I felt his flights of fancy sometimes asked me to work just a little bit too hard.

The show also suffers from one or two expository lumps, and Lancelot himself is curiously quickly forgotten.  But Quinn is a likeable and convincing performer – one of the few people you can genuinely imagine being both an actor and a comedian – and the sheer force of his vision and personality are enough to carry him through.  Get Lost, Lancelot is well worth seeing as it stands, and an even brighter future for it is easy to imagine.

This review of a show at the Brighton Fringe 2014 was published on Sunday 25 May.