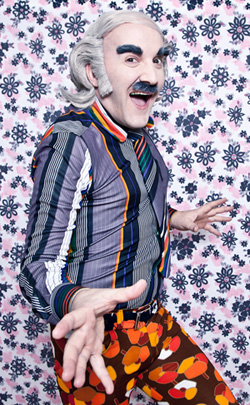 If you’re too young to even know what crimplene is, expect to be baffled by this crazy ride of a show.  But if you recall the 70’s – or if, like me, you’ve inherited a folk memory – you might enjoy its back-handed celebration of the most under-appreciated of decades, dressed up as the revival of a long-lost TV game show.  There are power cuts, a simulated bin strike, and (incongruously) a whole load of doughnuts.  You’ll probably be asked to sample them; it’s best to play along.

And you really do play along.  Laid out on the floor of the Marlborough you’ll find a giant board game, complete with Chance cards, hidden penalty squares, and an oversized foam-rubber die.  Divided into teams, the audience compete to be the first to live through the 70’s and emerge into 1980 (gloriously represented in the centre of the room by a spinning Orville).  The game board itself is a masterpiece – lovingly recreating the low-budget TV quizzes I remember from my youth – and the whole set exudes the merest hint of the psychedelic trippiness which runs throughout the show.

Depending on which space your die roll lands on, the two actors either kick off a mini-game, or play out a seventies-inspired scene.  There are a few undoubted comic highlights – my personal surprise favourite was “punk is dead” – and local legend Boogaloo Stu is the most amiable of hosts, engaging and sometimes cajoling his audience “volunteers” without ever resorting to hectoring or coercion.  But he’s a little slow to get started, and the energy he creates ebbs too readily away; the mechanics of running the show are a regular intrusion, interrupting the laughter just when it feels set to build.

Avis Cockbill is convincing as the glamorous assistant, prowling leggily around the stage, all the time sporting a grotesque pastiche of the permanent smile TV “hostesses” of the day were forced to wear.  Needless to say, it turns out she has a shrewd mind behind the vacuous façade, and some of the most engaging moments came when she was forced to cover for her husband’s misdeeds.  In fact, I wish we’d had more of a chance to hear about the characters’ stories; there were hints of darkness beneath the crimplene which were never quite explored.

To be fair, there might have been more insights lurking beneath the board-game spaces we never landed on.  And that’s my biggest problem with Crimplene Millionaire: it’s a little too faithful to its concept, too reliant on the roll of the dice.  Because we see the scenes in an unpredictable order, it’s difficult for the performers to structure a coherent storyline or progress from one theme to another.  And the rules of the game are a distraction too, to the extent that even our hosts occasionally seemed confused.

Entertaining though the individual vignettes are, the whole thing doesn’t quite pull together into a show.  But still, Boogaloo Stu’s creation is an endearingly authentic one, and Crimplene Millionaire’s an admirably wacky way to round off a day at the Fringe.  It’s an experience you’re unlikely to repeat for quite some time to come... and you’ll never scoff a chocolate doughnut with quite the same relish again.

This review of a show at the Brighton Fringe 2014 was published on Saturday 3 May.