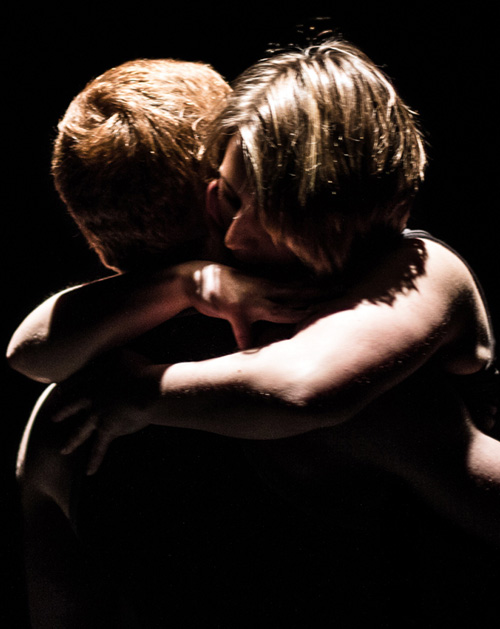 Circles inspired my curiosity from the moment I walked into the theatre. The stage was strewn with boxes and random objects; one of the actors sat still amongst them, while the other moved in and around the props. And as soon as they found a small teddy bear packed away in a shoe box, I was drawn into their childhood world of imagination and play.

The story unfolds as a brother and sister, Alex and Kate, talk to each other and intermittently to the audience. It is quickly apparent that Alex is moving out (or is it moving on?), a transition that’s inspired memories of their growing up together.  Beautifully, a sleeping body under a duvet is re-created into a mountain race track for toy cars, a teddy bears’ picnic takes place – complete with the perfect children’s plastic tea party set – and the very best thing in the world to own may in fact be a “packet of chocolate sardines.”

The narrative travels seamlessly between Alex and Kate's relationship as children and as adults. The age-old theme of sibling rivalry lingers throughout the action, oscillating between love and hate, annoyance and tolerance, empathy and disdain. There is a subtle twist to the story though, delivered in a very gentle way, which doesn’t come as too much of a shock but makes perfect sense once you know.

I particularly appreciated the old cine-film footage of the two young children playing together, and there’s a particularly pleasing the scene where they discover an ancient Walkman before singing along to an old Spice Girls number. It was yet another moment that brought my own childhood memories flooding back.

It's not very often that I would say this, but I did feel that the piece could have afforded to be longer. The ending came all too soon. Their father made a brief appearance (played by the same actor as Alex), but while there were a couple of direct references to her, we never physically witnessed the mother in the family. I felt the lack of her in the piece.

Nevertheless, actors Oliver Theobald and Leah Georges delivered a sensitive and touching performance throughout, and the last scene was particularly moving. They both confidently held the audience’s attention during the speeches directed specifically to us. The physicality between them is smoothly constructed, with the constant pulling towards and breaking away from each other mirrored cleverly in the dialogue.

Circles is a delicate show, and a gentle reminder that when it comes to matters of the heart, we should all look after the things we are the most scared of losing.

This review of a show at the Brighton Fringe 2014 was published on Wednesday 7 May.