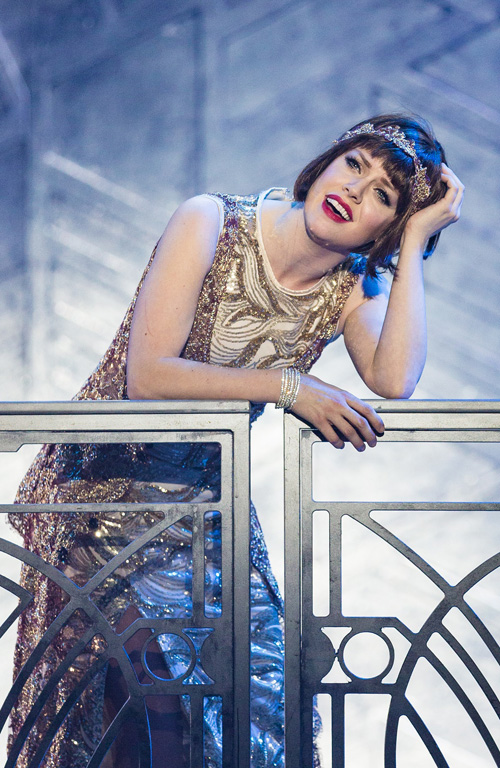 Thoroughly Modern Millie is a stellar performance, which left me buzzing and thankful to be alive, as we follow a group of young would-be actresses set out on a life of adventure in New York – propelled into their new lives at high speed, with the optimism and exuberance of youth. Set in the 1920s, it tracks the period just after the 18th Amendment was passed, declaring Prohibition and banning alcohol in the United States.

The story is, of course, best known from Richard Morris' 1967 screenplay – though the idea came from an earlier British musical called Chrysanthemum.  This new adaptation won awards on its debut in 2002; featuring new lyrics by Dick Scanlan and a fresh score from Jeanine Tesori, it retains Morris' rewardingly unpredictable plot-line.

From her very first appearance on stage, Millie Dillmount – masterfully acted by Joanne Clifton, best known as a professional dancer on Strictly Come Dancing – captivated my attention with her zest for life and determination to both marry well and marry for love. A small-town girl from Kansas, she wants all that life can offer and is determined to create her own opportunities. Clifton has great stage presence to match the role.

Mrs Meers, meanwhile, is apparently a dotty, insignificant, rather large matron. But she's not what she seems, and is responsible for much of the dramatic power and intrigue in the show; she delivers a lot of the laughs, as well. Lucas Rush should be applauded for his gender-transcending performance here – it's very Brighton – and with an acting career ranging from Shit-faced Showtime to Shakespeare, I suspect he is always accomplished and at ease.

Jenny Fitzpatrick, of EastEnders fame, has a sublime voice – and is warm-hearted, cunning and convincing as Muzzy Van Hossmere, the wealthy widow who wants the best for all of the young people she meets. Katherine Glover, playing Mille's best friend Miss (remember the title!) Dorothy Glover, and Sam Barrett as Jimmy Smith also entertain.

Despite a few echoes in the script of the stereotypes of the age, honours for cameo entertainment go first and foremost to Damian Buhagiar and Andy Yau, who play Ching Ho and Bun Foo: two Chinese brothers who are reluctantly complicit in the underhand dealings at the Premier Hotel. Rivalling them for the top position is the smooth Mr Graydon, played my Graham MacDuff, who provides hilarious slapstick humour in the second half when events do not turn out as he wishes.

Costumes dazzled with the razzmatazz of 1920s New York – reminding me of The Great Gatsby – and the orchestra accompanied the show with verve. Choreography was also excellent, with fast-paced dance routines throughout.

If you have seen the film, you will love this musical… but even if you haven't, there are twists in the plot, problems to be resolved and a comforting sense that good triumphs over evil in the end. Each character is compelling and unique. This is professionally executed, feel-good fun, with a healthy helping of suspense as well; for theatre as well as musical lovers, I'd rate it a must-see. And it's another triumph for Brighton’s Theatre Royal, which rarely disappoints in its selection of shows.

This review of a show in Brighton was published on Friday 7 April.