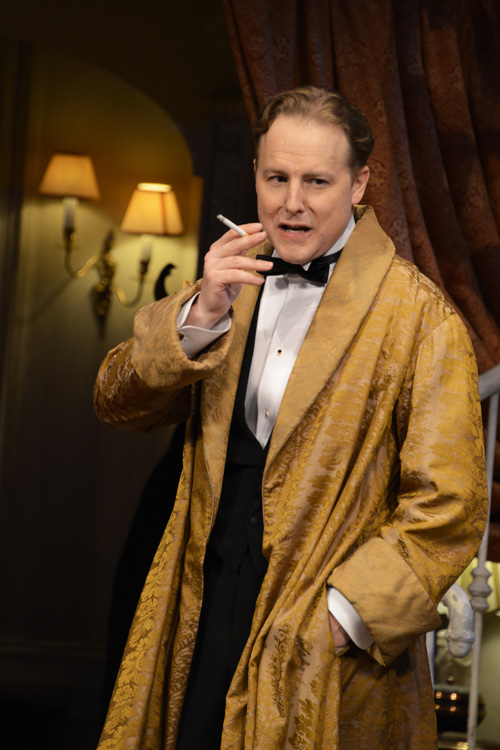 Present Laughter fizzles with witty dialogue from the outset. It is one of Noel Coward’s most natural plays: full of humour, with characters you care for, and very few villains. The upper-class setting is just that, and the characters are genuine; although a discriminating audience may recognise some well-known traits, no-one is stereotyped or typecast. And therein lies the success of this production, masterfully executed by a convincing cast.

In the world of the play, Gary Essendine is an accomplished and renowned actor – but he’s bossed around by his staff and his ex-wife, and has to navigate an array of young fans (who are mostly, but not all, female). He is generally blamed for most of his misfortune, while his successes are taken for granted rather than applauded. Don’t feel sorry for him, though; for Gary, life is a play and he enjoys being centre stage, drawing the audience in to his domestic bliss. He’s accused of “always acting”, particularly when he’s not doing what his associates want – and yes, he exploits this.

Gary is nicely characterised by actor Samuel West, who is often found in Shakespearean roles but here shows his range. His Gary is self-possessed and able to laugh at himself, but still vulnerable to the storms of life and the isolation of fame. Liz Essendine, acted by Rebecca Johnson, would like to think she pulls the strings, but actually it is Gary who maintains the group’s confidences and has the discretion to keep them to himself. He is arrogant, declaring; “Everyone worships me, how nauseating!” Yet he revels in it – and so does the audience.

The set is impressive, but natural and homely: Gary Essendine’s lounge. Actors make the characters their own and Phyllis Logan, best known as Mrs Hughes in Downton Abbey, steals some of the best lines, as she organises Mr Essendine’s life and has the thankless task of being his gatekeeper. Patrick Walshe McBride also deserves credit for a bold performance as aspiring playwright Roland, who criticises Gary’s choice of plays as frivolous and then retorts: “I love it when you are angry!” As the line illustrates, Gary cannot win, and yet he is totally in command.

It’s a moment of sheer brilliance too when the only villain of the piece to have some standing within the group is branded a “wretched prostitute” by an innocent young suitor, who knows nothing of her intrigue and fails to see the ironic similarities in their situation. Overall, then, this play is a delight, a glittering script brilliantly executed. In the best tradition of Noel Coward, it is light on action but sparkling with dialogue. Expect to be entertained.

This review of a show in Brighton was published on Thursday 11 August.