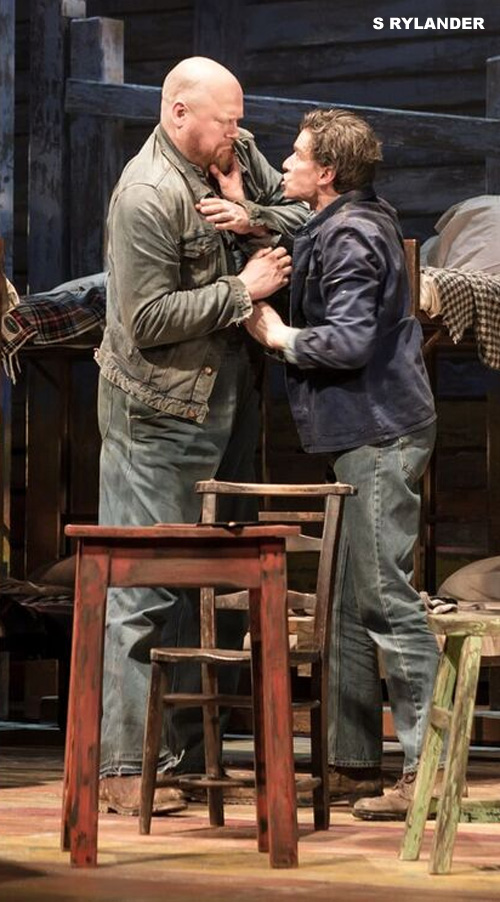 Based on John Steinbeck’s famed 1937 novella, Of Mice and Men is a period piece about forced migration triggered by drought and poverty in America. Many tenant farmers had to leave their land in the Dust Bowl, and seek work in California. Like migrants today, they were often resented rather than welcomed.

Director Guy Unsworth says: “I think Of Mice and Men is absolutely a play for today. It’s a hauntingly relevant reminder of the importance of home, companionship, and the pursuit of happiness and safety on this lonely planet…” You sense the migrants’ hardship early on when they stop to drink water from a ditch.

The two main characters, George and Lennie, travel together. Lennie is always getting into trouble because he is – in the language of the time – ‘simple’, and his very large stature attracts attention. Lennie can best be described as a big friendly giant, expertly acted by Matthew Wynn from EastEnders and Silent Witness.

Richard Keightley, an accomplished stage actor, plays George Milton. Milton's fine performance brings tension to the play, portraying a man who cares deeply for his friend but also yearns to be free of the responsibility of looking after him. He has lost innumerable jobs because of Lennie, whose limited mental capacity is neither acknowledged nor understood. Yet for all his grumbles, there is a sense that they both benefit from a friendship which reduces their isolation.

Andrew Boyer is worth a mention as the older labourer, Candy, who is touching to watch. Kevin Mathurin, meanwhile, plays the black stable-hand Crooks; in a break with convention, Crooks’ barn becomes the meeting place in the second half. Steinbeck’s original text observes the social norms and constraints of his time – including use of the n-word – but in a nice touch, it’s Crooks who is found reading a book while the other labourers go drinking in town.

The set too is clever, if economical, and the opening scene with migrants getting off the train draws the audience into Steinbeck’s world.

Most of the characters have a dream: only Slim (Cameron Robertson) and Curley (Kamran Darabi-Ford) seem secure in their present circumstances. Curley’s wife (Rosemary Boyle) and Lennie have the dreams which are farthest from reality, but they hold them fast – not hearing each other as they speak parallel narratives. For many the dream is simply of home, a room of one’s own and a small-holding where the workers can be their own boss.

For me, the first half of the adaptation was slow and heavy with dialogue, lacking in action. But I enjoyed the play overall; it has an inexorable quality and is well acted throughout. As a period piece, it may not be an obvious choice for a contemporary audience, but its themes of migration and a search for home surely endure.

This review of a show in Brighton was published on Thursday 15 March.