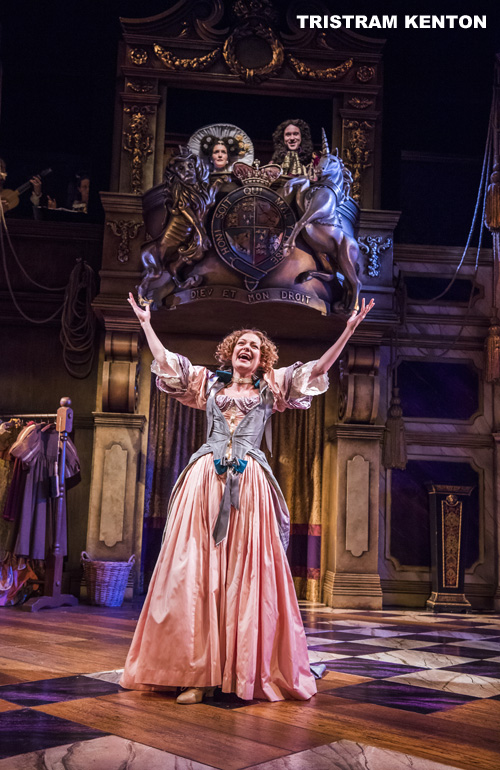 Set in 1660s London during the reign of Charles II, and starring Laura Pitt-Pulford in the title role, Nell Gwynn tells the story of a vivacious and bawdy woman with a love of life and a tendency to get her own way. A lowly orange-seller and former prostitute, Nell interjects during a play, thereby becoming the first woman to appear on stage. A series of jokes ensues about the physical merits of women in theatre; Nell dazzles actors and audience alike, and eventually catches the eye of the King.

Ben Righton plays Charles II with great presence, playing Nell skilfully at her own game to win her affection. At first her confidence wavers as she encounters new worlds, but in the second half Nell grows into her royal position – citing her many “responsibilities” when Sister Rose complains she never visits. She even sees off an aristocratic French suitor who threatens Nell’s proximity to the King; yet it is poignant that Nell’s association with the Charles undermines her ability to be judged on her merits as an actress.

Director Christopher Luscombe should be congratulated for bringing the best out of a well-cast group of actors. Esh Alladi plays Edward Kynaston with great humour. Clad in a bra, he's accustomed to playing the heroine and takes exception when Nell usurps his role; full of hyperbole and theatrics, he steals the show on several occasions, even when describing an oak door. Actors will be actors.

Another welcome cameo features Old Ma Gwynn, who ran the brothel in Cheapside – she visits Nell, berates her and steals the silver at the same time. However, it's Mossie Smith who brings the house down as dresser Nancy, particularly with an unexpected response when promoted to an actress towards the end of the play.

This comedy sparkles with wit and colour throughout, and the songs add another dimension; all the instruments are contemporary and the musicians accomplished. In this play about making plays, it's the theatre company which has most of the best lines – though Arlington, the courtier, manages to inject a little menace towards the end.  But Nell, of course, will get her revenge.

This review of a show in Brighton was published on Thursday 9 March.