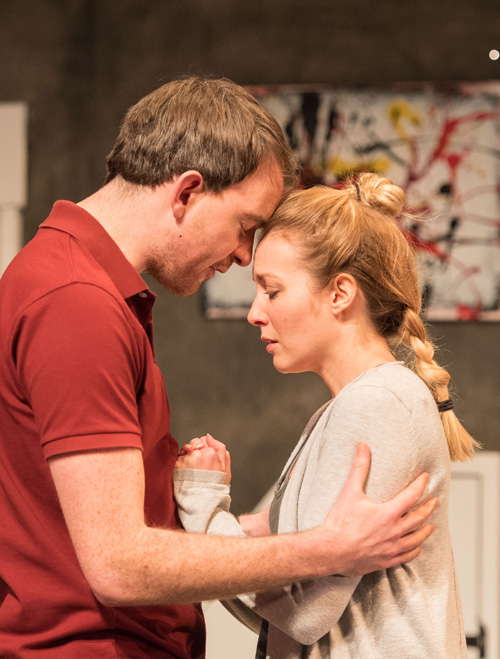 Invincible is a play about a clash of cultures, when a middle-class couple from London move up north and try to forge a friendship with their very different working-class neighbours. Tensions within each couple are evident from the outset, as is the gap between them, a combination which provides a lot of light entertainment.

The first half is somewhat let down by one-dimensional characters, each acting according to a stereotype. Yet Invincible does offer a lot of laughs, particularly from Alan (acted by Graeme Brooks), a larger-than-life postman with a carefree disposition. He could not be more different to the highly-strung Emily, acted by Emily Bowker. She is left-leaning and if you met her, you would expect her to be a “spiritual but not religious” vegan with a passion for meditation… and a set of ideals that fails to match the messy lives they live.

I appreciated the contrasting musical interludes between the scenes, which provide a welcome break from a generally dense script.  The pace is slow at times.  One problem is that the script introduces many, many ideas and touches on many ills within society, without fully exploring or resolving any of them.

At the very end of the first half, the audience receives its first surprise and the drama begins. After the interval, Dawn (acted by Elizabeth Boag) and Oliver (played by Alastair Whatley) take centre-stage, and the secrets and lies start. If you like cats, prepare to be amused or horrified. This second part does contain drama and satisfying twists, as the two apparently more “normal” characters interact with their partners with a mixture of tenderness and hypocrisy.

For me, too much of the slapstick humour is predictable and unconvincing. Yet in the second half reasons for bizarre behaviour emerge, and I am reminded that – DNA aside – environment and the past shape everything, and do indeed hold people captive.

By the end I had a tear in my eye, which means that playwright Torben Betts achieved his objective of delivering an “emotional punch.” It's just a shame that, despite convincing acting, his characters lacked the depth and complexity to fully draw me in. I think the play has a great deal of potential: ideas overflowed and I enjoyed the mental stimulation, but sadly, I never cared enough about the couples to truly suspend belief.

This review of a show in Brighton was published on Thursday 30 March.