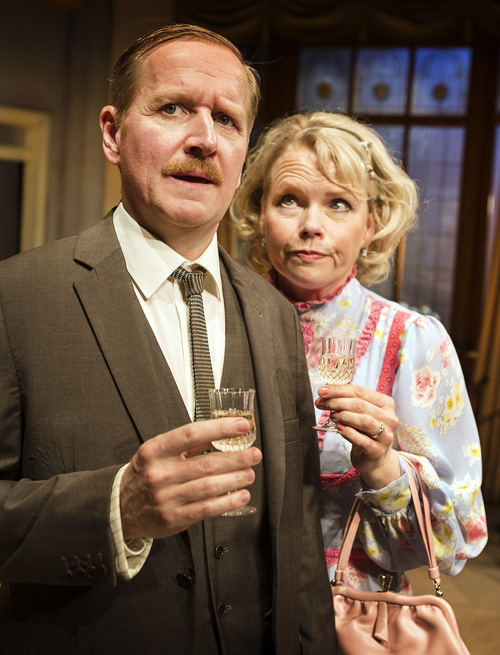 How The Other Half Loves is a comic period piece by Alan Ayckbourn, both written and set in the 1960s. It charts three days in the life of three couples, exploring themes of marriage, infidelity and class – as well as motherhood, sadly as an aside.

The play’s structure is its most interesting feature: characters come and go on the same set, even though they're in two separate living rooms. The three men all work for the same company. Robert Daws plays Frank Foster, the most senior of the three; he’s an unreconstructed man of his time, but he has a heart and loves his wife Fiona. As Fiona, Caroline Langrishe is cool, calm and indifferent, with very little sign of a soul. It's a strong performance from an actor whose range stretches from Shakespeare to Midsomer Murders and Hollyoaks.

Couple number two are no less accomplished. Charlie Brooks (of EastEnders fame) gives a heart-warming performance as Teresa Phillips: young, loving, a terrible housewife, and perhaps not a natural mother. Her life is characterised by chaos, as she seeks to understand what is wrong with her husband. Leon Ockenden plays Bob Phillips well: indifferent, sullen, and driven by basic instincts. His too is a familiar face, thanks to credits including Coronation Street and Mr Selfridge.

William and Mary Featherstone, the third couple, get stuck in the crossfire between the other two. Their marriage is strong, their lines are never smutty or crude, and their lives are simple – or so they think, until they meet the Fosters and the Phillips. I could watch Matthew Cottle as William Featherstone and Sara Crowe as Mary anytime; it’s often the case, I think, that it's strong cameos from more minor characters which make theatre great.

The direction by Alan Strachan is good; he’s a friend of Ayckbourn’s and, he says, particularly likes this play. For me though, it's too recognisably a 1960’s farce, contemporary at the time of writing. Many of the jokes felt distasteful to me, while Ayckbourn’s exploration of marriage is cynical. And with no reconciliation or satisfying resolution at the end, I left feeling the play was oddly incomplete.

A lot of the jokes are slapstick and, if you want a light-hearted evening out, do go along to see How The Other Half Loves. But for me personally, this revival of a dated script isn't the best advertisement for Ayckbourn's work.

This review of a show in Brighton was published on Thursday 23 November.