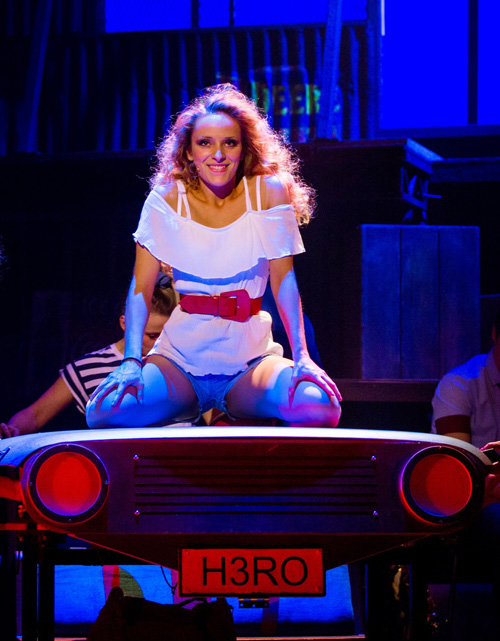 Footloose is primarily about young people wanting to celebrate life. Based on the original film produced in 1984, the show opens with the actors playing instruments, singing and dancing – an energetic musical extravaganza. Accomplished actors and detailed direction from Racky Plews make the complex choreography look effortless.

A boy from Chicago, Ren McCormack, arrives in the small town of Bomont with his mother Ethel, after his father walks out on them. An excellent, versatile set captures the five different locations around Bomont where the action takes place. At first people distrust Ren, a streetwise stranger, who is direct and forgets to charm the adults. Teachers often blame him unfairly, but Ren treats them with spirited disregard and wins over his classmates.

Characterisation is good throughout. Ariel, the daughter of Reverend Shaw Moore, feels trapped in Bomont under the constant watchful glare of her father. The church casts a large shadow over the town, and the Reverend was instrumental in passing a law against dancing following an earlier tragedy.

Reverend Moore’s difficulty in relating to his teenage daughter is masterfully captured – he has a good heart, but has lost touch with the confusing world of adolescence – while his wife Vi is wise and humane, seeking to understand not judge. (Vi, incidentally, is played by Maureen Nolan, of the legendary Nolan Sisters, one of Europe’s first girl bands.) Ren’s mother is equally supportive of her son; both mothers recognise the need to give teenagers wings as well as roots. The young people are “pumped up with promise and wrestling with rage.”

Above all, Ren, acted by Luke Baker, epitomises the vitality and vibrancy of youth. He challenges Ariel to see that “running away will never make you free.” He may be hyperactive, but he is also a careful operator, who takes time to get to know his peers and never wavers in wanting to live life to the full today instead of dreaming of a better tomorrow. It is Ren, encouraged by his mother, who risks vulnerability with the Reverend and thereby uncovers the solution to the conflict between young and old.

While some of Ariel’s friends lack depth, the interaction between Willard (acted by Gareth Gates) and Rusty provides humour throughout the show. Willard, often tongue-tied, grows in confidence because of his friendship with Ren, and enjoys his moment of glory in his shorts.

My overall impression is that the show makes me glad to be alive. Life is a gift; let’s revel in it.

This review of a show in Brighton was published on Wednesday 27 July.