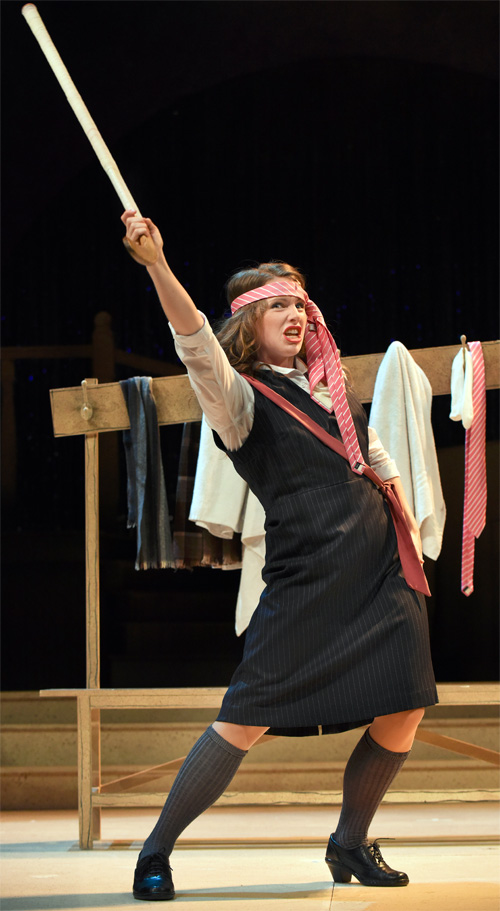 This production is a mix of St. Trinians and Mallory Towers, with a dash of Daisy Does It Again. All the necessary ingredients are there: the girls, aided by the loyal Miss Austin (Sara Crowe), strive to save the Dame Dorothea Dosserdale School from the tyranny of Miss Bleacher, portrayed brilliantly by Rosemary Ashe.  Running alongside this – and the main focus of the piece, in some respects – is the blossoming romance between two of the Sixth Form girls, the dependable Susan (Stephanie Clift) and the over-dramatic Camilla (Charlotte Miranda-Smith). And interestingly, in the main, it seems their classmates accept this relationship as the norm. Or do they...?

The ensemble is strong; their voices are pitch-perfect, and they dance along with tremendous energy throughout. Kathy Gotts’ musical numbers are original, catchy and toe-tapping, allowing the players a range of styles to play with – and play they did. I loved the song where the run-away science trolley dominated the scene, and a tongue-in-cheek Marlene Dietrich number was carried off brilliantly by James Meunier. The game of hockey re-created through tap dancing was a fabulous piece of choreography from Richard Roe, and allowed for the awe-inspiring games mistress, Miss Givings (Kirsty Malpass), to come bursting onto the stage.

But the stand-out number for me was set in a night club, where the velvet tone of Brianna Ogunbawo's voice was a stunning complement to her commanding stage presence. I could have listened to her singing all night. There is also a more serious message to be found amongst all the jolly hockey sticks; the musical number between Clift and her parents beautifully demonstrated how the knowledge of a child's sexuality can be misunderstood, and manipulated by parental prejudices and wishes. You could not fail to be moved by the poignancy of the words.

I wasn't quite so sure about the paper-and-pen, cardboard-look set; to me, it seemed a little incongruous, at odds with the setting of the 1960's. It did, however, allow the live band to be visible, which is a bit of a treat these days.

Despite the slightly predictable ending – and an over-zealous smoke machine, which left the front rows blinded for a few minutes whilst Clift sung earnestly about her broken heart – this was a thoroughly enjoyable evening. As a new musical comedy, it deserves to do well, thanks in no small part to a cast who are clearly having a good time together. As the song goes, I “Totally, Utterly, Truly” mean that.

This review of a show in Brighton was published on Wednesday 23 September.